Just after New Year, Geoff wrote out their training schedule, and now they were ready. Ready to cycle across Britain – from Whitehaven in the Lakes to Sunderland in the north east – over the course of 5 days.  The doggies and I were going to be mobile B&B back up in our van for His Lordship, and Hamish’s wife Kim, their daughter Lois and their doggy Effy, would be back up in their van, for Hamish. And amazingly, the weather was looking good.

Day One – Whitehaven to Keswick

It was a bit grey and drizzly when they set off mind, but thankfully not really raining.

Having never been to Whitehaven before (that I can remember, anyway) I was quite surprised at just how large and busy it was. We had a bit of a trek through the centre to get back to the vans, stopping at a large pet shop for a bit of a nosy, and I was absolutely amazed to see that they sold special anti-fox poo shampoo for those smelly dogs in your life! I was nearly tempted……

Anyway, the road beckoned, and the doggies and I were soon bowling along on our own little road trip.

We didn’t have far to go today, just to a caravan site in Borrowdale. I chose the route over Whinlatter Pass and apparently the guys did spot me in the distance as their route approached the summit, but I didn’t notice them. The doggies and I were having too much fun listening to, and singing along to, Suzanne Vega.

Having been such a long time since I’d been to Keswick, I did give in and go on a bit of a gear shop fix. All I could find to buy though, was a new Buff. An indication of how much gear I already have, perhaps?

On arriving at the said site, Kim and Lois were already there. Lois was on a mission, too. She’d decided to bake something tasty for everyone each afternoon and was in the middle of producing some delicious choc chip cookies.

Tilly and I had a very short wander (she’s still convalescing after her slipped disc remember) and Dixie and I had a bit of a longer wander around the lake. 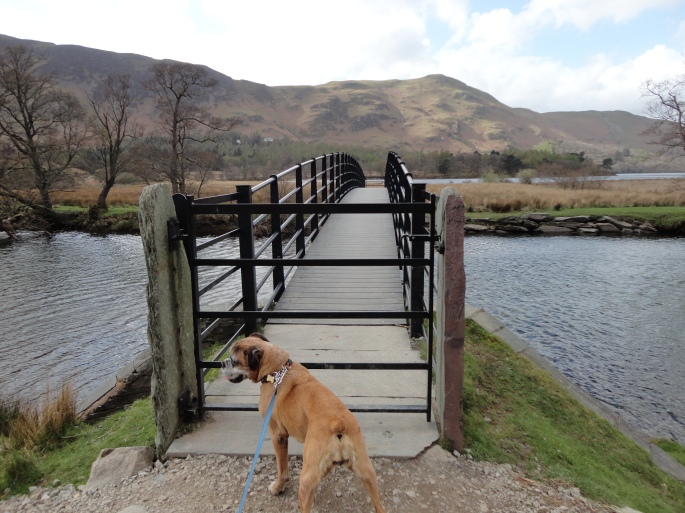 The warriors turned up late afternoon and were soon supping a post-ride beer. 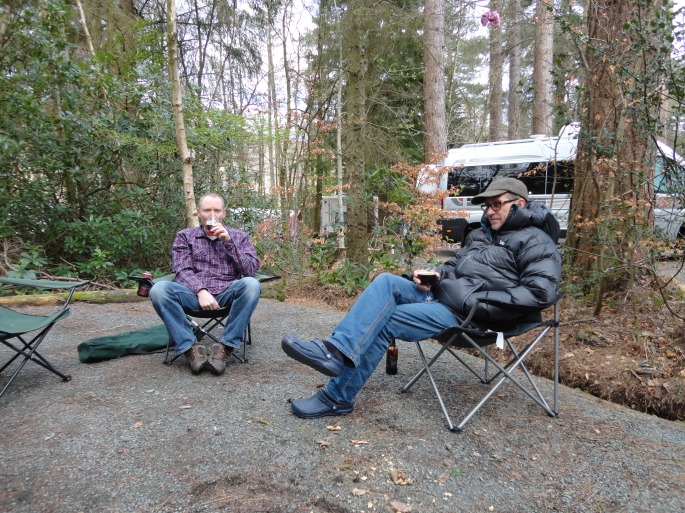 As soon as the pair of them had set off, I was on the road too. I liked to get going and make sure I was at the next stop by early afternoon and then I could relax and have a bit of a walk myself, knowing that the van was already in the right place for the night.

The doggies and I were really starting to relax into our road trip now. And today we mostly listened to, and sang along to, Bellowhead. (One of Dixie’s favourites.)

Tonight’s spot was a delightful little community campsite right next to the River Eden, in the village of Lazonby.

With plenty of country side for a couple of doggy wanders.

And Lois’ culinary offering for all this afternoon, was a gorgeous Victoria sponge.

Unfortunately we only got one piece each, as when no one was looking, their dog Effy jumped onto the table and ate the half that was left. I think she enjoyed it, though.

Today was a bit of a highlight for all the roadies.

Absolutely beautiful weather and a wonderful drive over Hartside Pass.

Being lunchtime, we had to call in for a bite to eat and were just tucking in to fried egg and bacon sandwiches, when who else should turn up thinking of their stomachs?

And the fun driving continued after lunch, down the far side of the Pass and on to the village of Nenthead, where we decided to wild van camp for the night.

Today, the doggies and I were mostly listening to, and humming along to, Kathryn Tickell. (One of Tilly’s favourites.) 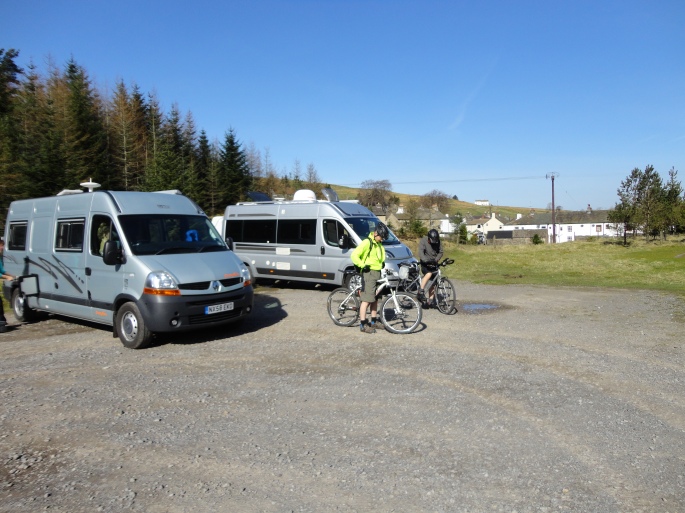 There was a track from where we camping, that led past some old lead mines and up on to the moors. Just perfect for Dixie and I to blow some of the cobwebs away in the afternoon. 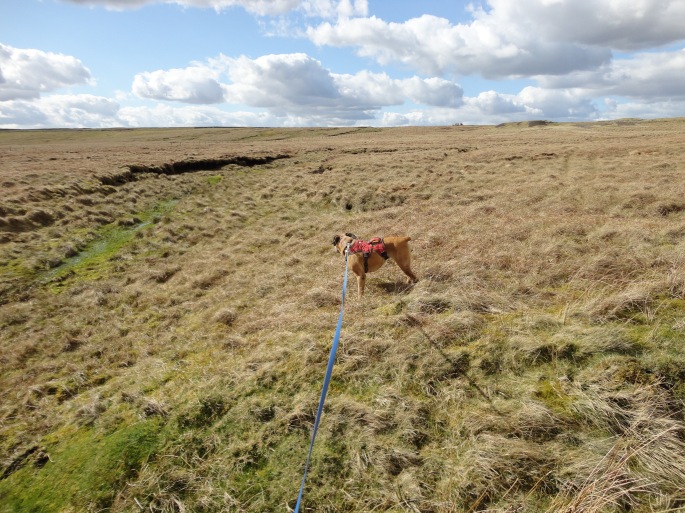 And what did Lois magically produce for us this afternoon? Fresh scones with cream and jam. 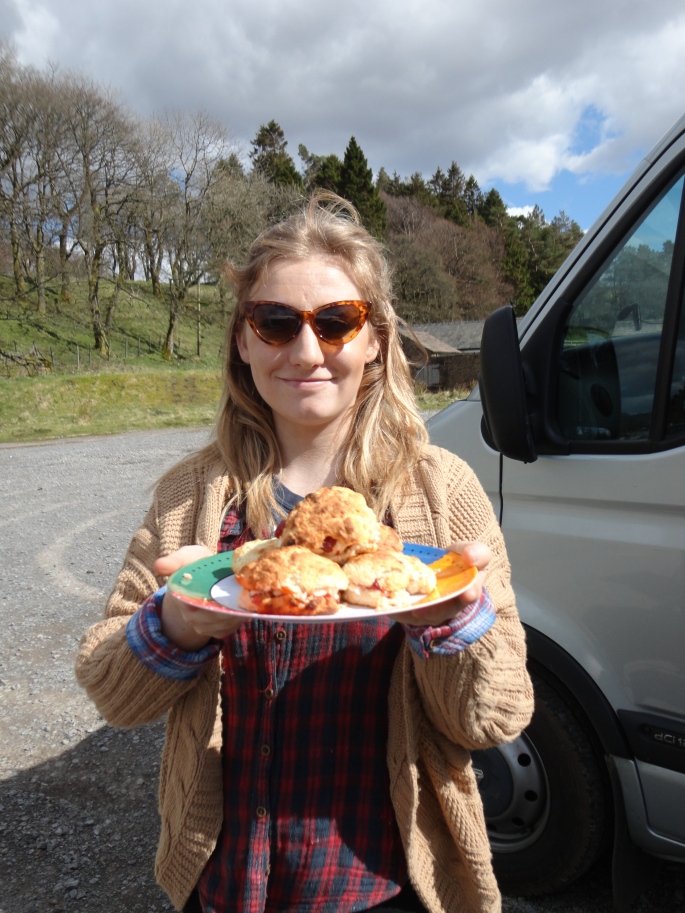 Another gorgeous day. And another spot for a wild van camp, high on the County Durham moors. 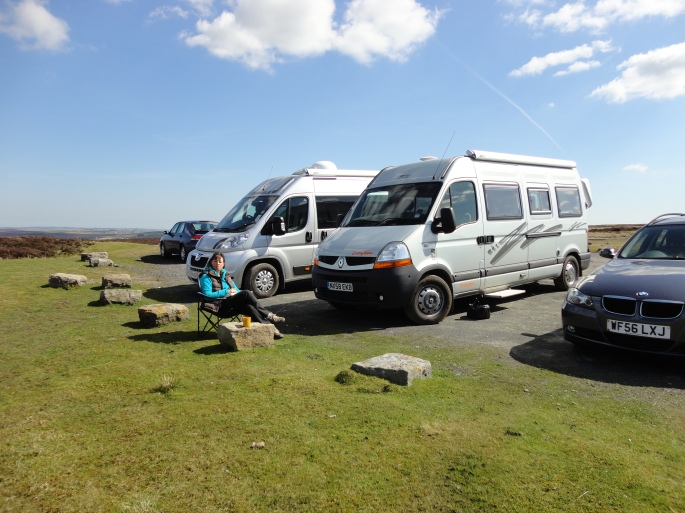 Once again we drove straight there and had plenty of time for a good wander along the old railway track, before the wandering cyclists turned up. 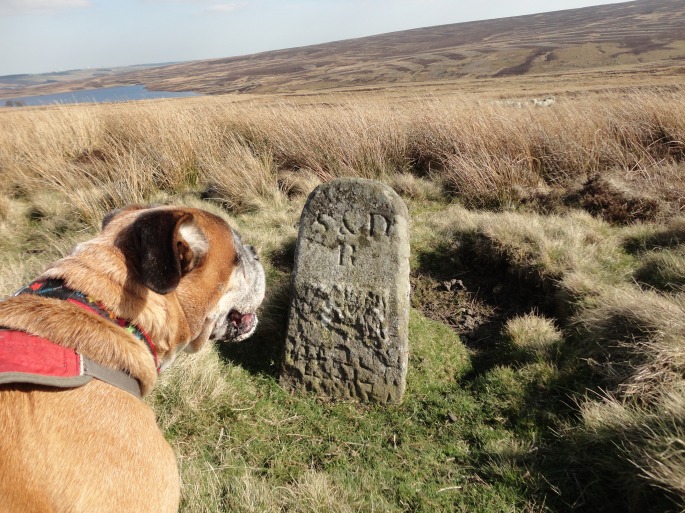 Which they did, just in time for Lois’ magnificent cup cakes.

And today, the doggies and I were mostly listening to, and singing along to, Mumford and Sons. (Everybody’s favourite.)

And so to the last day of the ride. 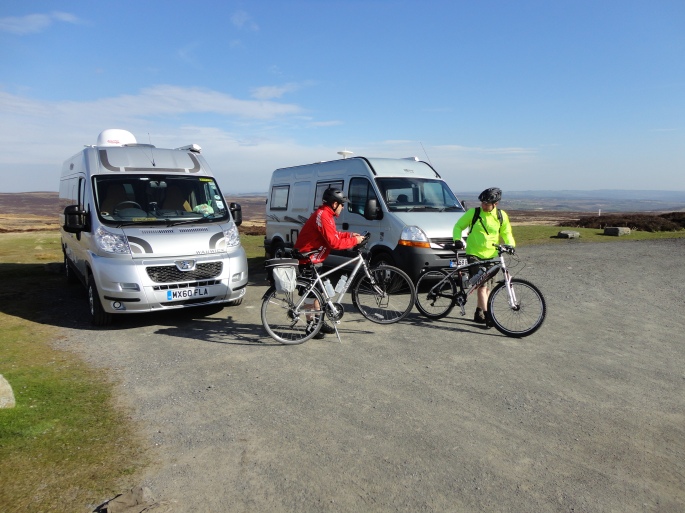 Yet another warm and sunny day, and great excitement as they were finally going to make it to the east coast.

Not so much fun for the roadies today, mind. Navigating through and around Sunderland and the outer edges of Newcastle proved to be slightly stressy. Thank goodness for sat navs, is all I can say!

And today, the doggies and I were mostly listening to, and humming along to, Kathryn Tickell again. (We needed something calming.)

We made it though, and positioned our selves at the official finish, waiting eagerly. 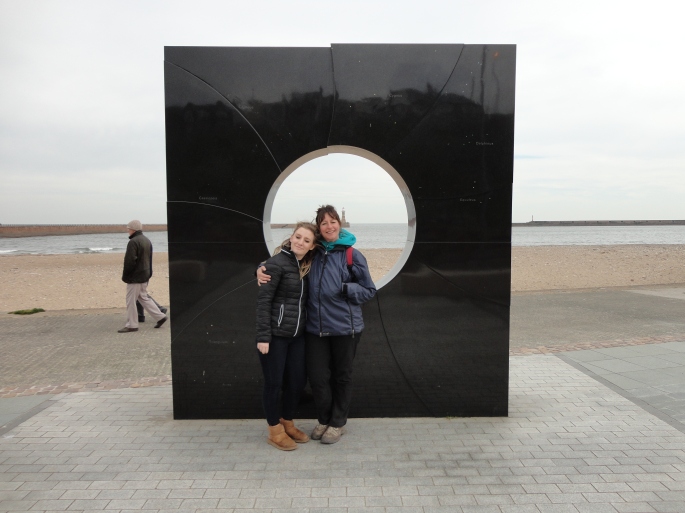 And the final home-cooked offering from Lois? Chocolate fudge cake…..