Last night’s pitch had been particularly mozzified. Luckily, it hadn’t been too warm to eat in the tent. Geoff is particularly skilled at cooking in the porch by sticking his hands through a mega small opening in the inner door zip. Having freeze dried food which only needs boiling water adding to it obviously helps!

We set off quite early today with the plan to get a few more miles under our belts, initially following the route back through the forest alongside Stuor and Unna Dahta.

Geoff did take a wrong turning at one point, but I managed to shout him back before he’d gone too far. 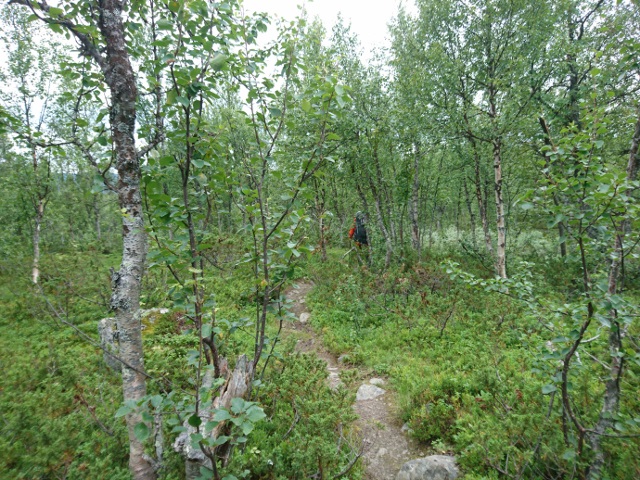 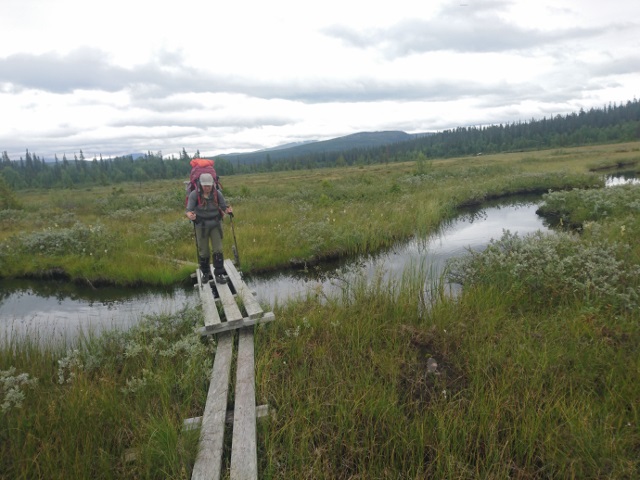 On reaching the junction with the Kungsleden again, we stopped for a long lunch break before turning north east, to explore in that direction for a couple of days.

The weather suddenly turned bitter while we were eating. I put my jacket on and my hands were so cold, that as they warmed up when we started moving again, my finger ends hurt like mad.

And then the rain started. And got heavier. And got heavier. We covered a couple more miles until we were alongside the eastern end of Stuor Dahta before deciding we’d had enough for the day. By this time, the area wasn’t conducive to flat, grassy camping spots, but we found somewhere that would do.

Thank goodness for outer-pitch-first tents! I dread to think how awful it would have been trying to pitch in those conditions in our old Voyager that we used to use in the States.

I went down to the lake for water. 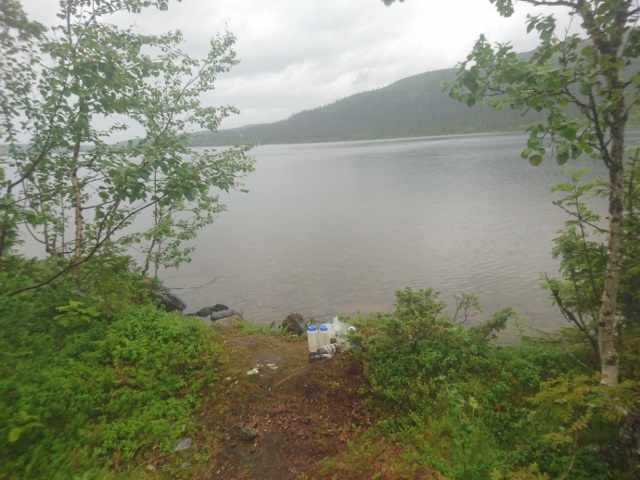 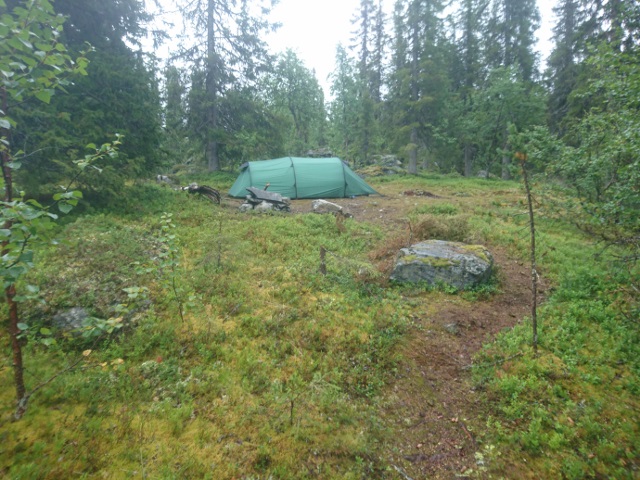 It was only about 2pm and the rain wasn’t due to stop till after midnight. It never let up.

We played I Spy for a while, but Geoff is so awkward – constantly using abstract nouns – and even verbs. He won, 4 games to 3, but only by stretching the rules.

The next game – The Chain – was much better. Far less competitive. Anyone who listens to Radcliffe and Maconie will know this one. You say a song title and the artist, and the other person has to come up with another song plus artist that links to it in some way. (You can’t have the same artist twice on the run.)

This was much more fun and kept us occupied till tea time. 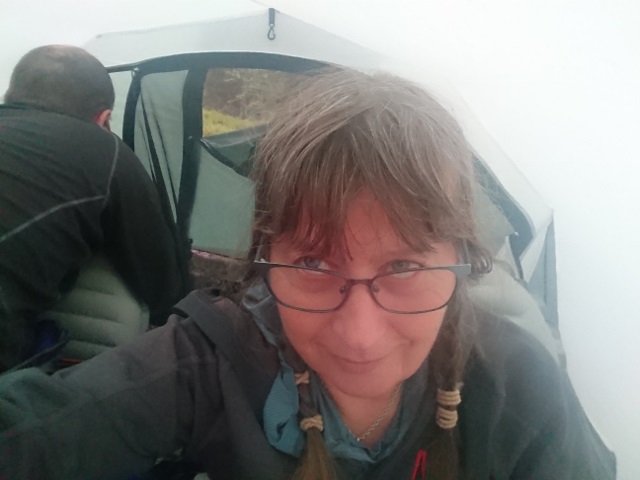 We couldn’t think of anything else to play after that.

Thankfully, the rain had stopped by the time we set off this morning. We contiued along the Kungsleden, aiming for the Parte Hut. 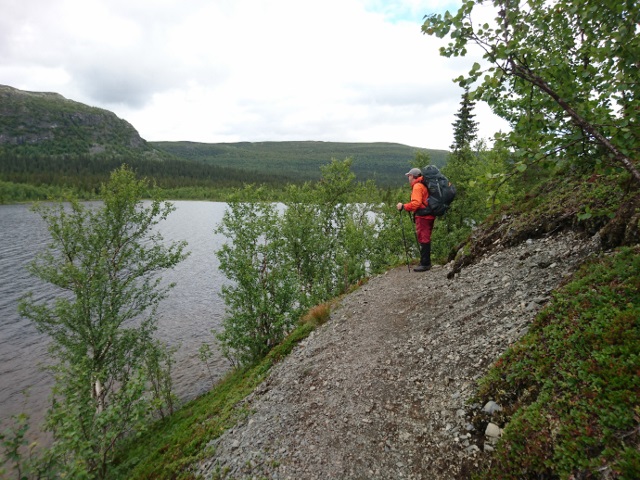 This was actually one of the roughest sections of the whole trip.

The wet rocks and tree roots made for unbelievably slow going.

We never intended to spend the night at the hut, but called in to drop some rubbish off.

The warden was very pleasant and chatty, gave us a drink of strawberry juice – it was rather delicious – and suggested we might be able to pitch our tent up a bit further round the lake. (Geoff was suitably shocked at how much it would cost us to pitch at the hut, around £20 per night, so that wasn’t going to happen.)

So we carried on just a tiny bit further and found the most sloping pitch of the trip.

For once, though, the mozzies didn’t stop us having a relaxing brew outside.

I’d slept surprisingly well, considering I’d had to belay myself from a nearby tree to stop me sliding out of bed.

Today’s plan was to leave the tent where it was and walk with day stuff only, to a high point about 4 miles away. 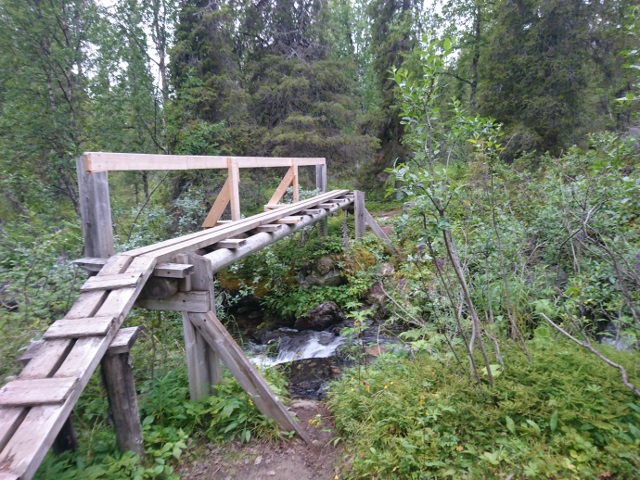 We were aiming for a saddle in between two tops – Favnoajvve and Huomnasj. 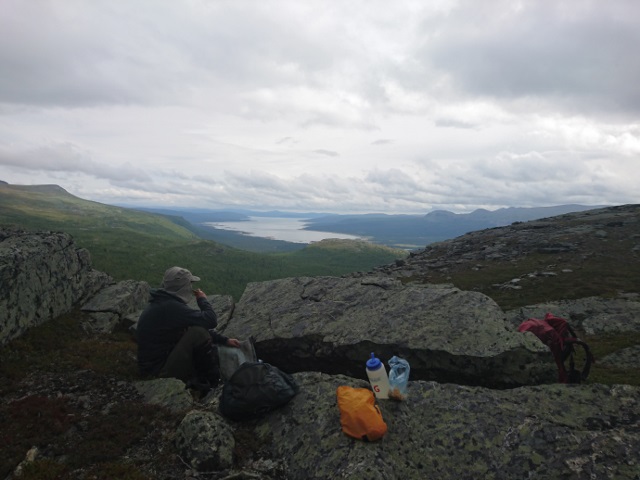 A group of reindeer made the moment complete. 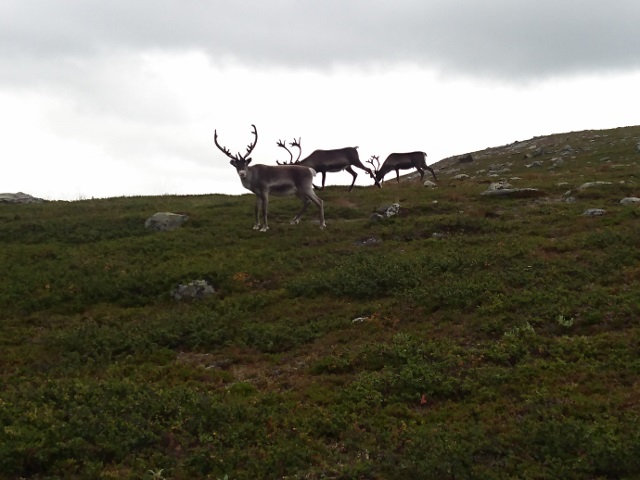 Once again, walking back to the tent in the afternoon, we felt quite privileged. 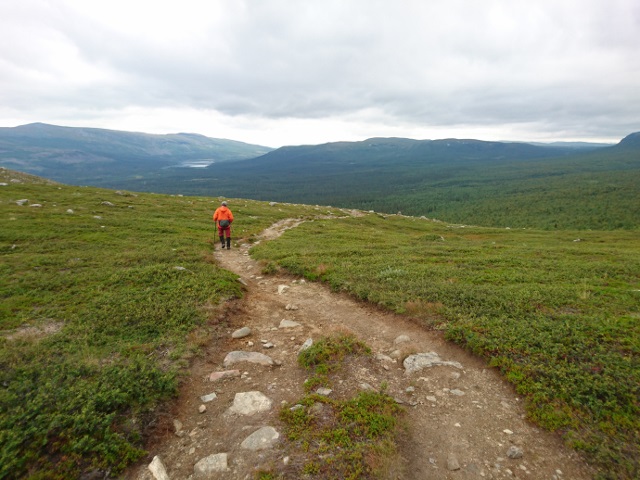 Another dry day, and we aimed to get back within two or three miles of Kvikkjokk. 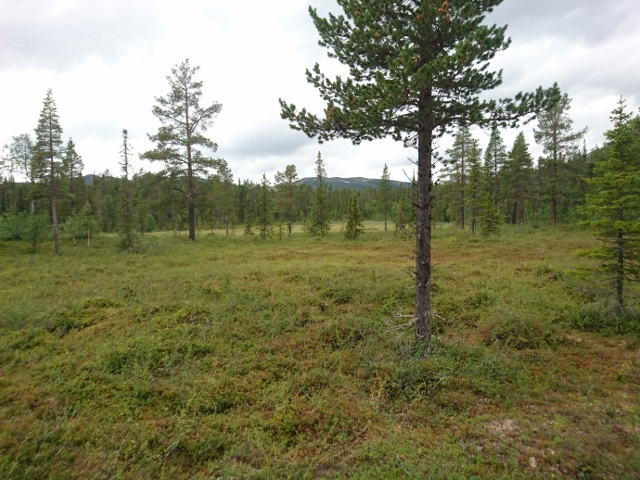 When we reached the really-rough-underfoot section again, we continued on where we’d left off, with The Chain. 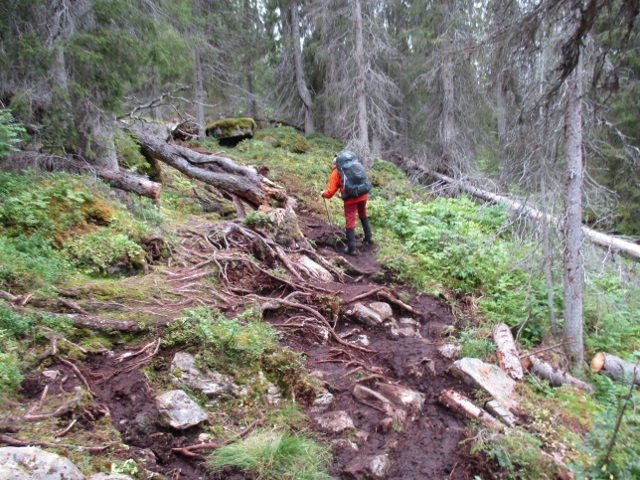 And tonight’s spot won the prize for the most mozzified pitch of the trip, by far.

And so, we walked the last couple of miles into Kvikkjokk, timing it just right for lunch in the STF Hostel. 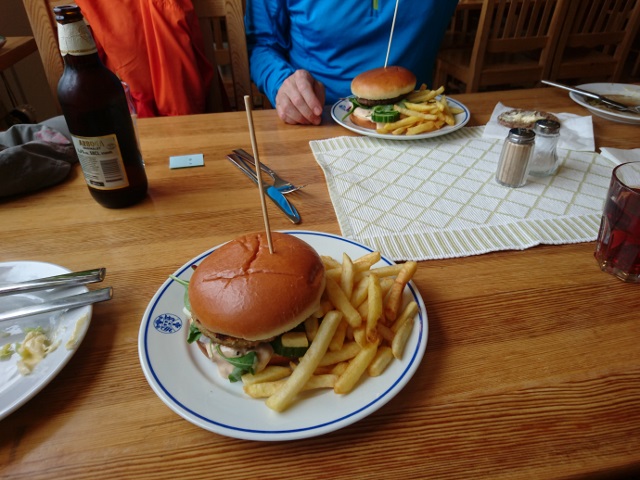 I was so ready for that meal. Eight days of freeze dried food does take its toll and I’d been fantasizing about chips for days!

The night was spent pitched in the village and we were up the next morning in time to catch the 5:20am bus back to Lulea. Then it was back to the Arctic North Hotel once more, before flying home the next day.

A grand trip, with lots of great memories.

Geoff’s ramblings about part two of our trip, are here.