‘22 July 1954. Four RAF Sabre jets from No 66 Squadron had taken part in “Exercise Dividend” practicing air defences against a simulated attack on Britain by Soviet nuclear bombers. It was a huge undertaking, the largest since the war and a total of 6 aircraft across the country were lost that day, two of them here on the northern flank of Kinder Scout in the Derbyshire Peak District.

Upon completion of the exercise the jet fighters were heading back to base at RAF Linton-on-Ouse. Split into pairs, Flying Officer James Desmond Horne led Flight Lieutenant Alan Green down through dense cloud at around 6pm.

The Sabres were seen tearing above the Kinder Reservoir, apparently unaware of the steeply rising plateau directly in front of them. It appears F/O Horne saw the slope at the last instant and pulled up sharp.

It is not known exactly what happened next, but at least one of the aircraft hit the corner of the plateau and then both jets tumbled out of control, down from the plateau edge and onto the moor below. Perhaps F/O Horne had clipped the ground and brought the other down, or Fl Lt Green, in suddenly having to react to his section leader’s wingtip going vertical, had just got too close in the haste? Or perhaps both aircraft simply failed to clear the hill side? No-one knows for sure. Their bodies and the wrecked aircraft were discovered 3 days later by a hill walker.’

The aircraft was being ferried from Burtonwood to Hardwick by a two man ferry crew on the 11th October 1944, the two men took off in the aircraft from Burtonwood near Warrington at 10:32. The set a course of 135o and climbed to an indicated altitude of 2800 feet. At approximately 10:45 while in cloud and moderate to severe turbulence Lt Houpt spotted a small gap in the cloud and saw the ground was only about 150 feet below him. He then applied full power and began to climb, but before they could gain any meaningful height the aircraft struck the ground on Mill Hill some 1.5 miles from the Grouse Inn between Hayfield and Glossop.

The two men extricated themselves from the shattered cockpit and walked along one of the streams until they reached the Hayfield to Glossop road. A passing lorry driver stopped and picked them up and took them to a nearby pub where Lt Houpt telephoned Burtonwood to report the accident. They were then retrieved by an Ambulance from Burtonwood and their injuries were then treated. These were mainly cuts & bruises but Lt Houpt did suffer a broken jaw.’

David and Moss arrived. This was all the excuse Pebbles needed to behave like a total nutter for two days, especially since Moss is her Second Best Boyfriend. I alternated between coping with a pulling Boxer if we walked behind – because she wanted to be with Moss – or a continually turning around and pulling backwards Boxer, if we walked at the front. In the end, I found walking at the front marginally better.

Our route up was via William Clough.

The weather was gorgeous. Dry, sunny and warm, but quickly cooling as the sun went down. Overnight was beautifully clear – with ice on the tents – until about 5am, when the cloud came over and warmed everything up. 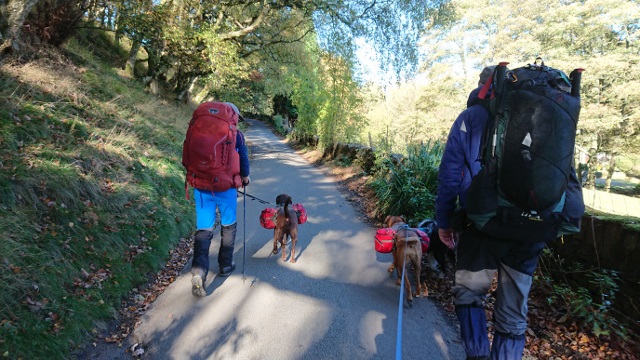 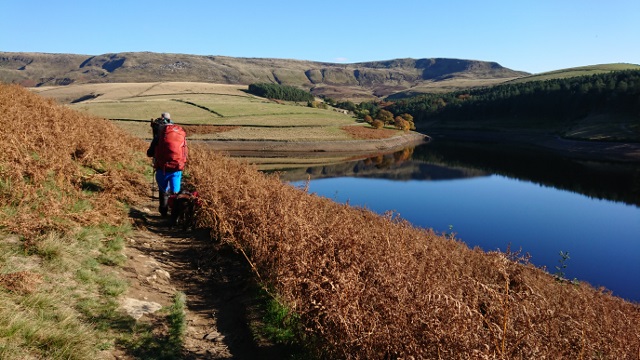 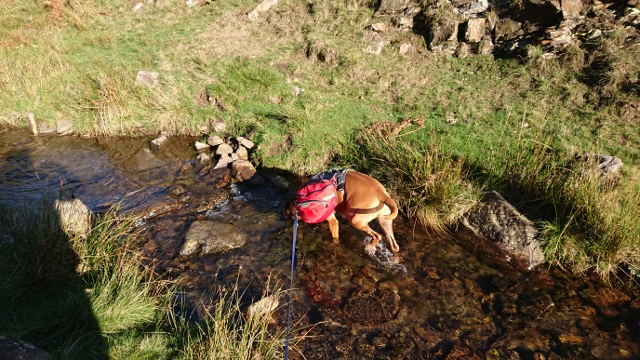 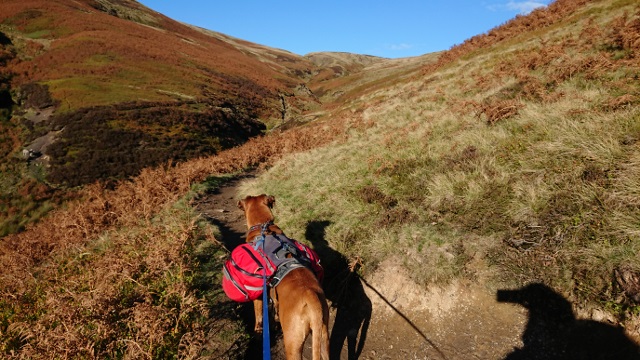 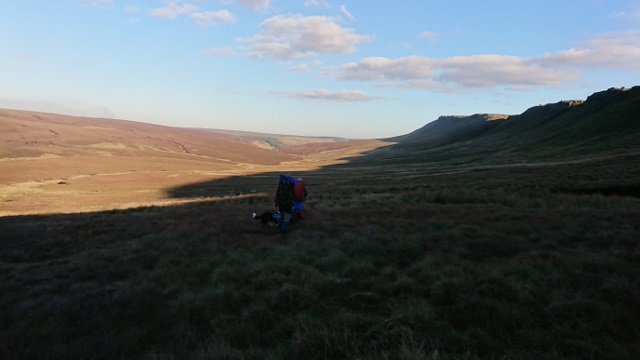 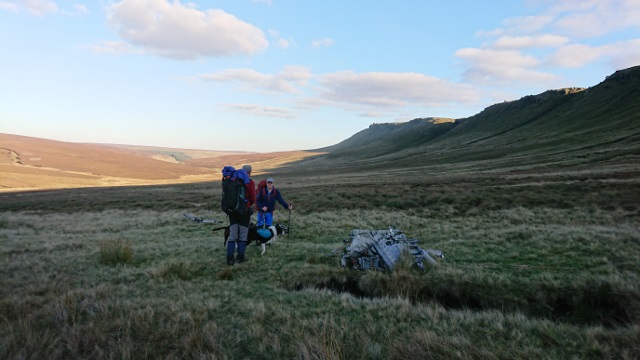 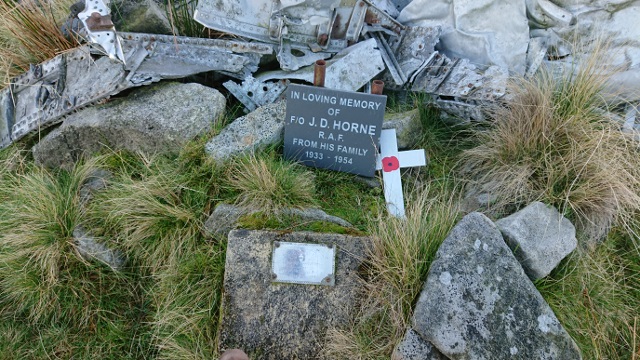 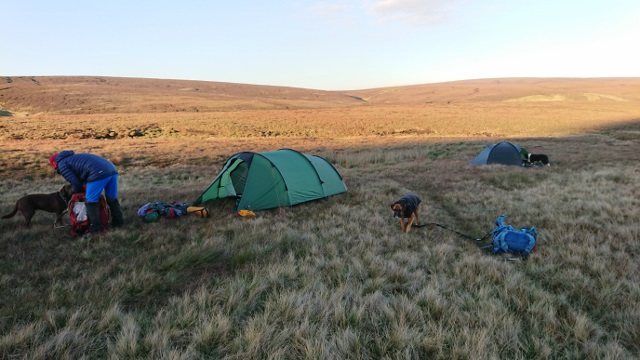 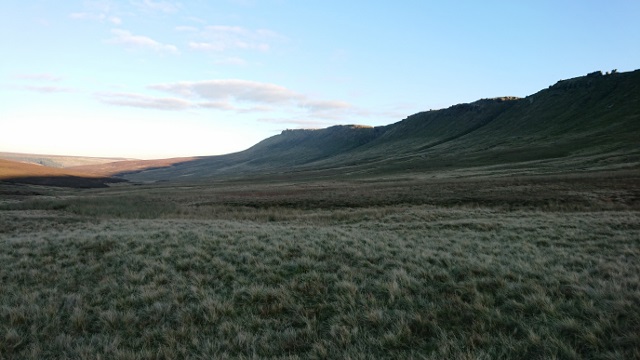 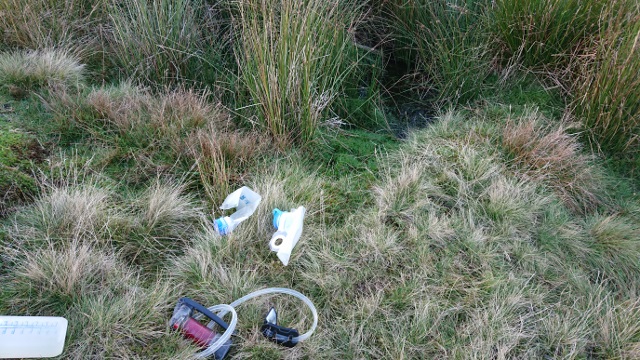 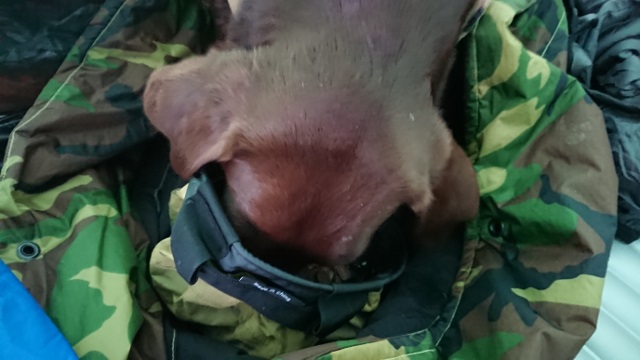 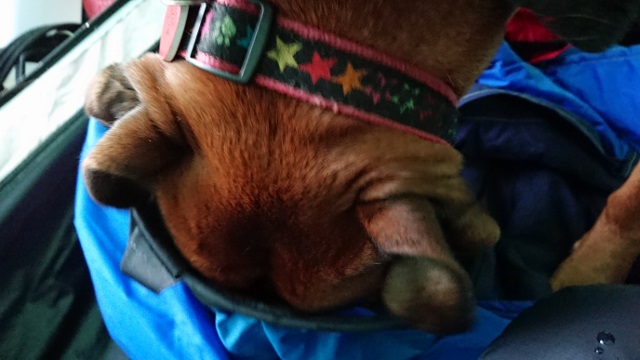 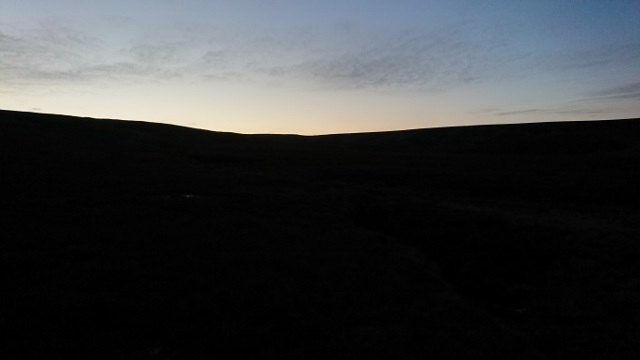 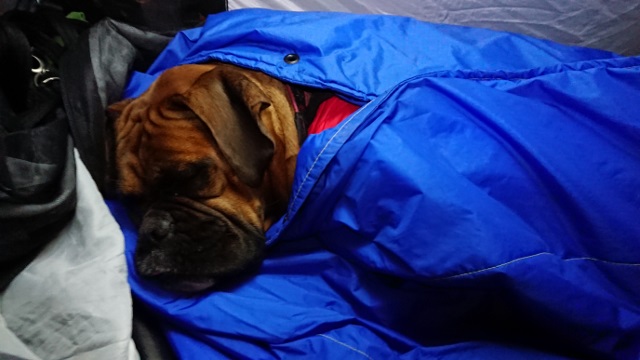 No sun this morning, but dry and pleasant. A bit of a slackpacking start saw us heading back to our pad, via Mill Hill and Little Hayfield.

In order to maintain my sanity, I spent quite a bit of today way out in front of the others, with Pebbles. She did calm down eventually.

I’m only jealous really, I wish I had her energy and outlook on life!

She doesn’t do mornings, though. 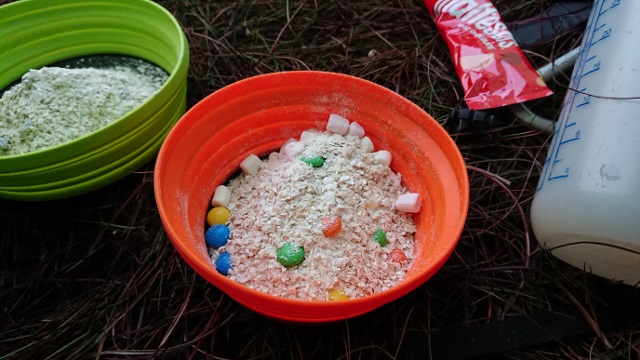 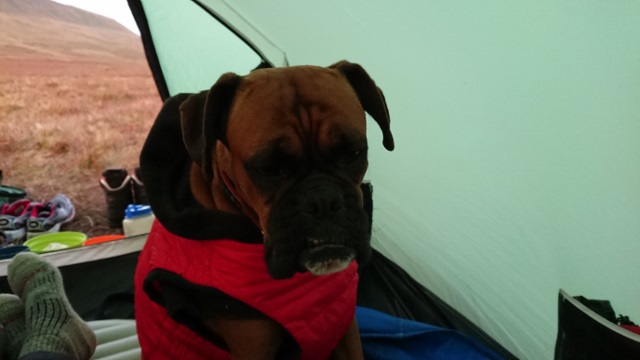 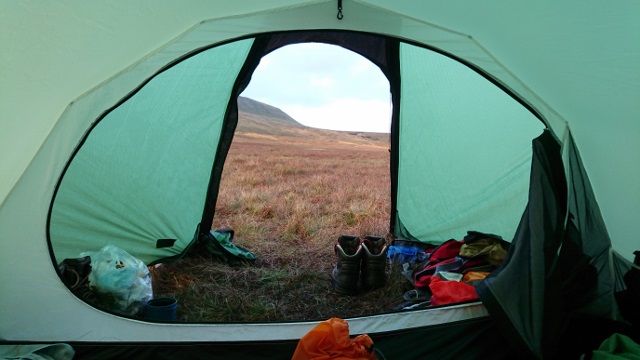 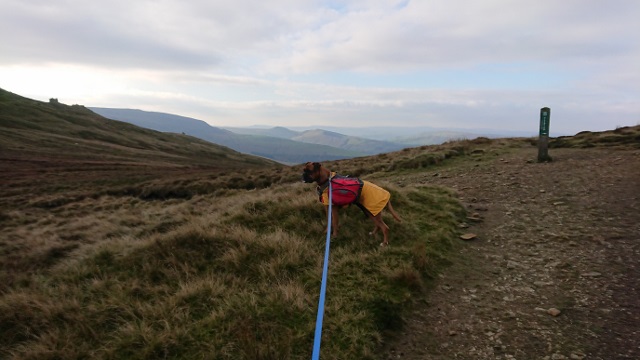 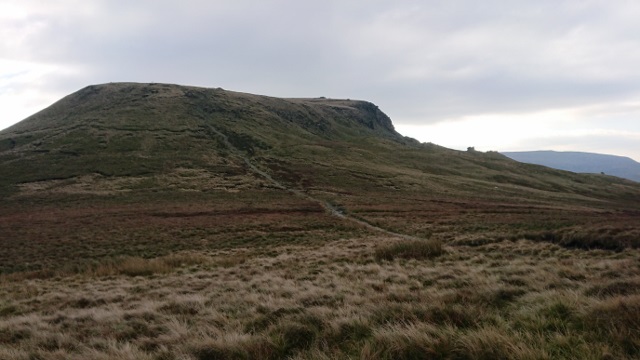 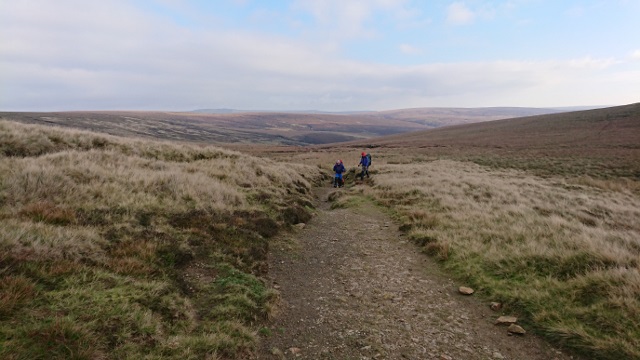 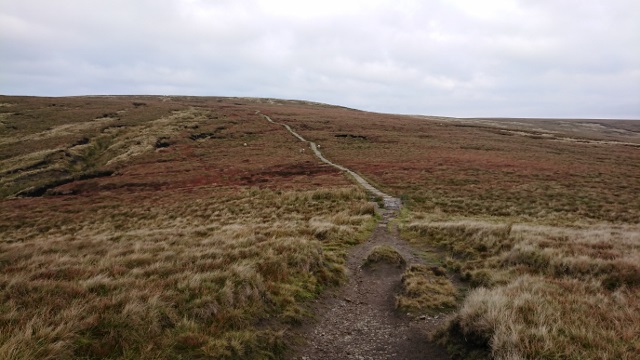 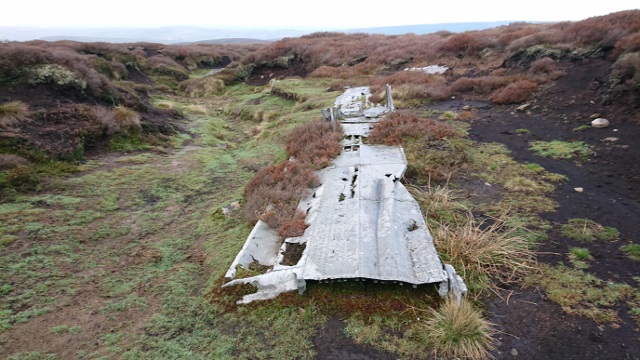 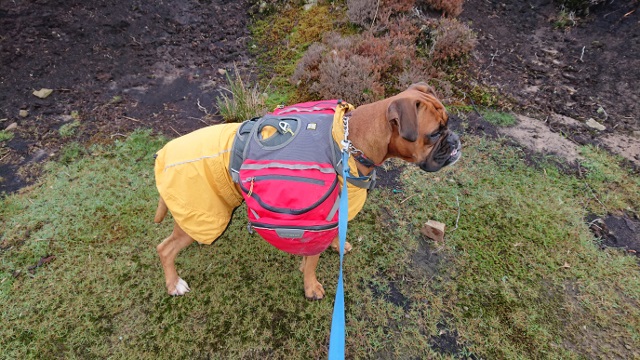 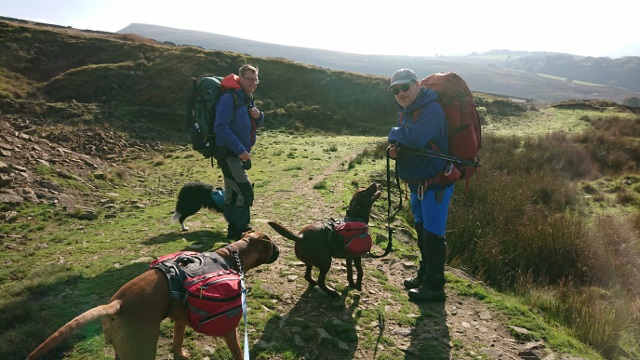 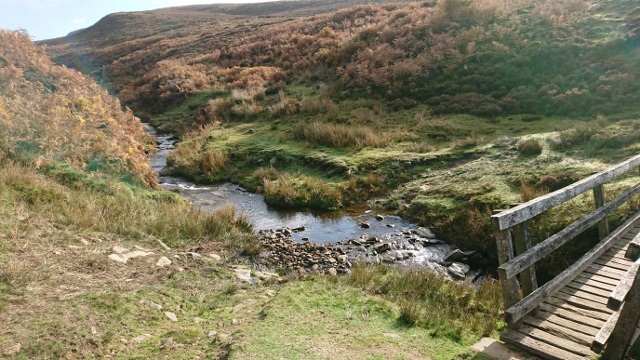 10 thoughts on “Sabres And Liberators”