Pebbles and I plan a three day backpacking route around the Dark Peak – starting and finishing at our house. Reuben and James are invited. We all have a couple of weekends free, so we pick the last one in March. Seems as good a one as any.

They come over to Hayfield the night before, making for a relaxing morning on the Friday. There’s no need to get up silly early and rush off. The days are all about the same length – around 9 miles.

The forecast is good! Leaving the house at around 11am, we walk a couple of miles before first lunch.

Pebbles has known Reuben for a couple of years and she is madly in love with him. This is their first backpacking trip together though and the excitement is almost more than she can bear. Constantly wanting to alternate between smothering him in kisses and play fighting with him, he enjoys the attention – but only up to a point. Every so often, he has to put her in her place. That’s fine. She needs to learn to be cool and play hard to get. 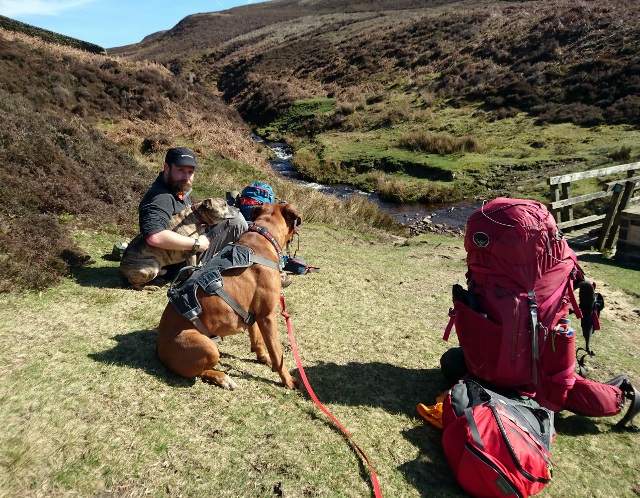 Out of the wind it’s surprisingly warm, but as we get higher and finally join the Pennine Way on its winding, flag-stoned way over to Snake Summit, the wind is quite bitter and relentless. 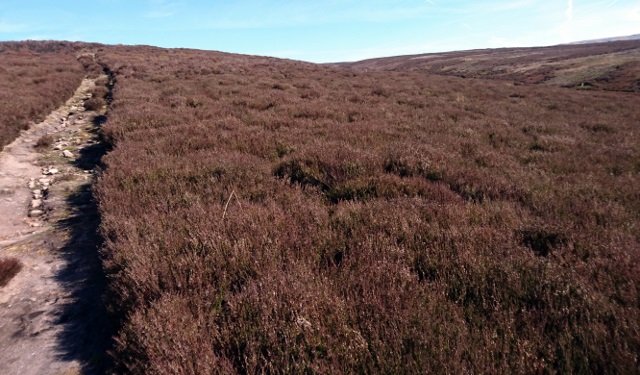 Second lunch is had at the Liberator wreck, on the way to Mill Hill. 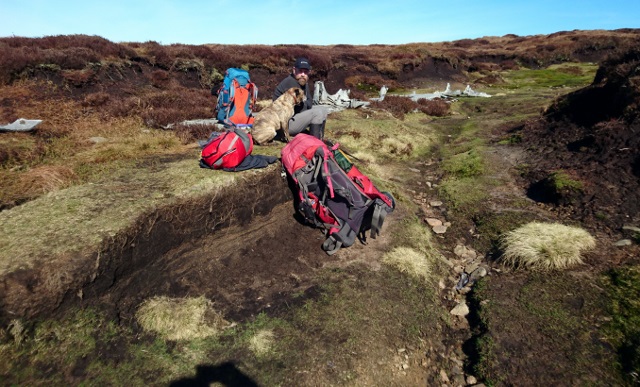 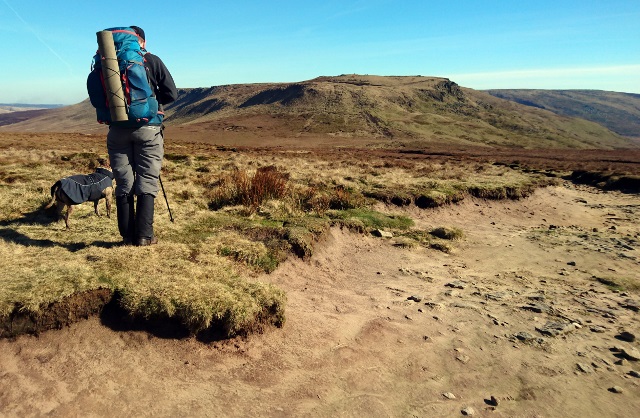 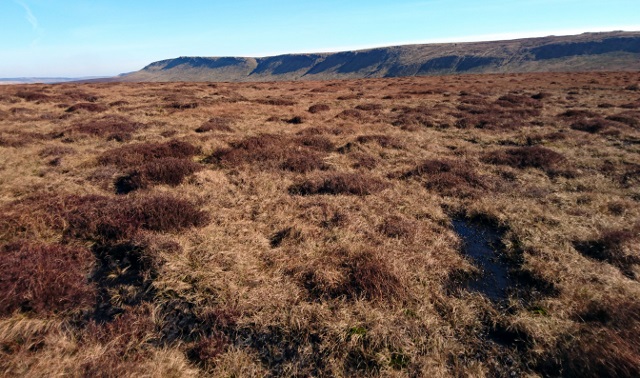 It’s a bit of a slog over to Snake Summit, so a third lunch is had not long after we hit Bleaklow. And from there, it’s only a couple of miles to our pitch for the night. 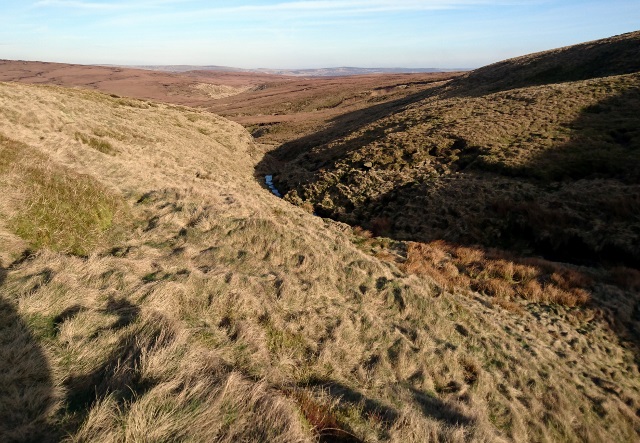 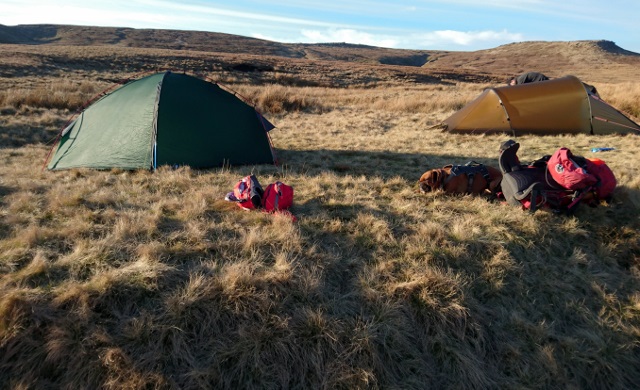 We’re a bit sheltered here and the wind finally drops completely. It starts to feel like it’s going to be a cold night.

Pebbles is normally impeccably behaved in the tent, but knowing that Reuben is nearby is driving her nuts. We have half an hour or so of toddler like tantrums – during which time I could have quite happily packaged her up and sent her home – before she finally settles back into the cuddly Pebbles I know and love. 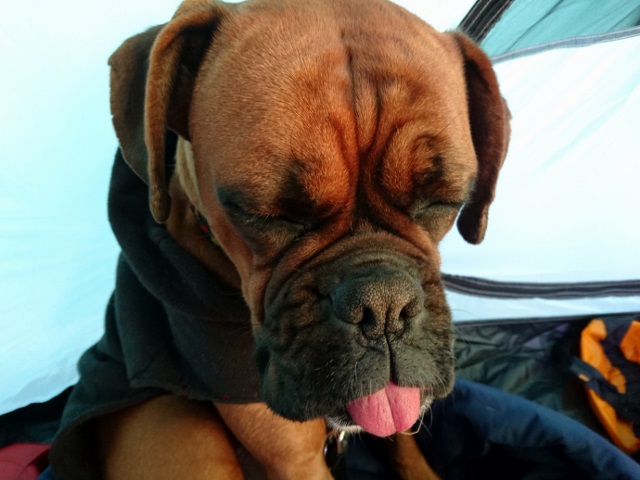 We eat, then feel tired, then Pebbles and I fall asleep – snug and warm – around 8pm. However, I awake quite suddenly at around 10pm. I’m cold and shivering. Touching the sides of the inner, I notice that it is covered with a thin film of ice. Donning my down jacket, I go out for a wee, then bring both my boots and the water purifier into the tent inner. Before going back to sleep, I check on Pebbles. She’s curled up, fast asleep and as warm as toast. I’d be the first to admit that the fancy dog sleeping bags we got her and Islay are ridiculously – even obscenely – expensive (primarily due to import tax etc from the States), but they really are the business. I’m very happy to see that her bag is keeping her comfy and warm, even when the temperature is obviously below freezing.

I awake again at around 3am, this time too hot! I remove my down jacket now, and spend the rest of the night quite happily….. I haven’t quite had the faith to bring my three season sleeping bag for the weekend like James has, but am more than content now to have lugged my winter bag up here.

We aren’t planning an early start, so by the time we surface for breakfast the sun has nicely warmed everything up. It’s even nice enough to eat outside. 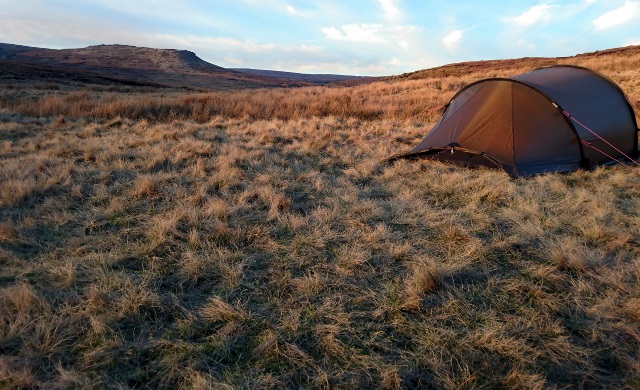 We set off for the day at about 10:30. We’re now totally off path for a few miles, heading for a trig point to the east of the Alport Valley. It’s wet, it’s peaty, it’s slow going. 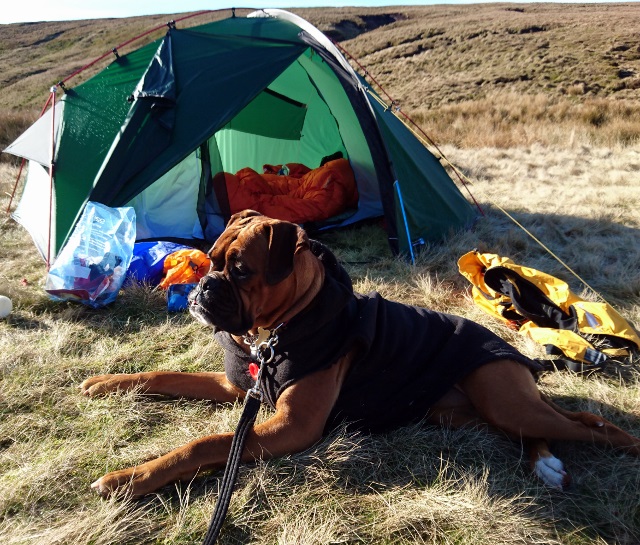 Conversation runs a bit like this for most of the weekend:

James: My pack is too heavy.

Me: Bet it’s not as heavy as mine.

Repeat any of the above at random intervals.

First lunch today is when we finally reach the trig point. 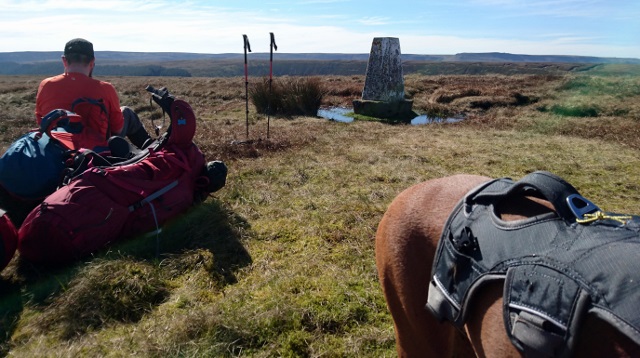 A bit of a path is picked up here, making progress a little quicker. It’s not long before we reach Alport Castles, for second lunch. 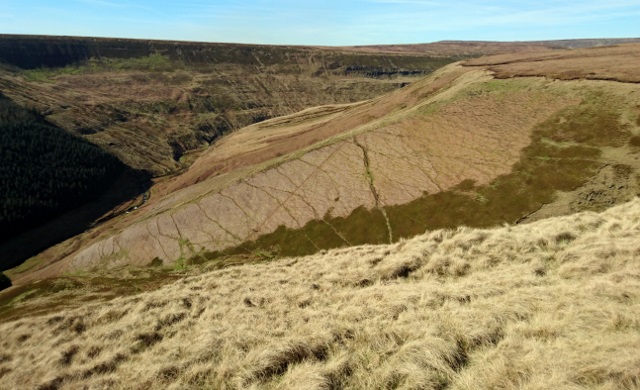 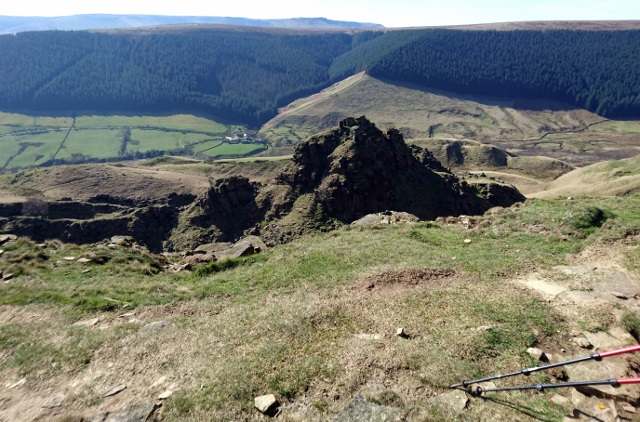 It gets hotter and the packs get heavier. We continue on, partaking of third lunch just before dropping down and down, to cross the Snake Pass near Hagg Farm. Then it’s up and up again – a quick break in woodland in Woodlands Valley – and onto the Crookstone Hill path to take us to the eastern summit of Kinder. Part way up here, fourth lunch is had by the lonesome tree. A rather special tree with a bit of history, I suspect. 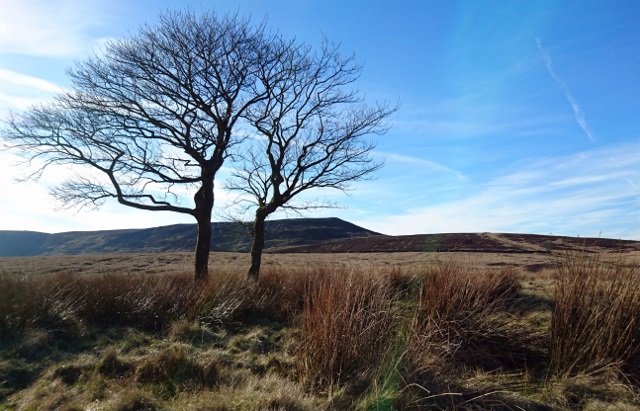 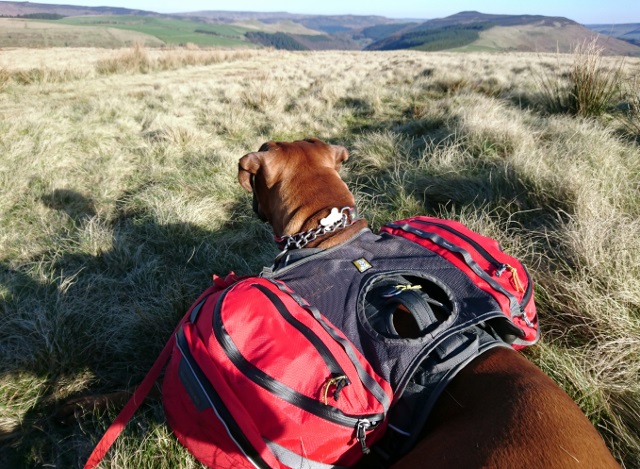 My phone rings and we have a brief Peter Kay moment.

It’s Mark, somewhere near the summit. And no, we can’t see him, but he can apparently see us. We’re both wearing orange……

Off we go again. Mark wanders down as we wander up, and we meet. Pebbles goes into overdrive once more, but quickly settles. She’s tiring now, but is still game and having fun. A bit of a conflab ensues, and a bit of a wander around produces a perfectly acceptable pitch for the night, with water not far away in Jaggers Clough. 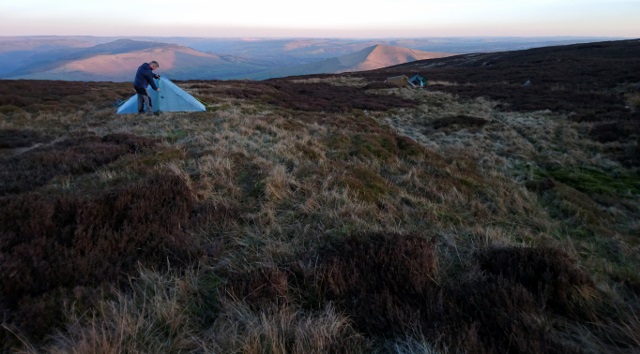 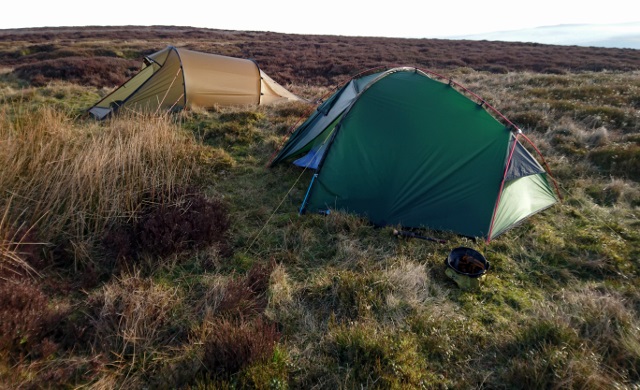 We pitch, then take it in turns to watch the dogs while we filter water. 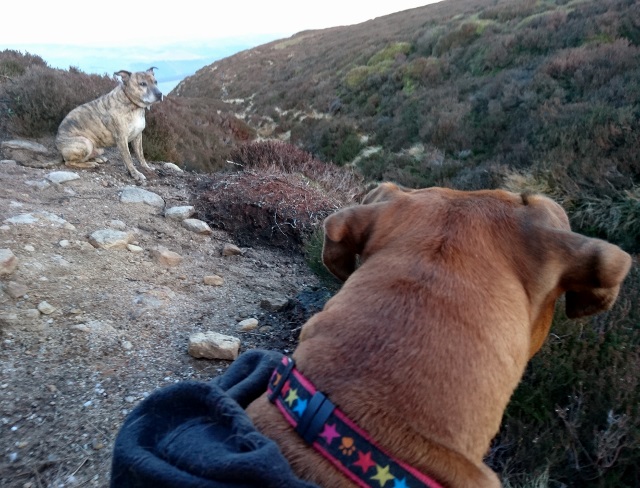 It’s cool, but nowhere near as cold as last night. We chat for a while, eat, then fall asleep. I sleep really well. As does Pebbles. 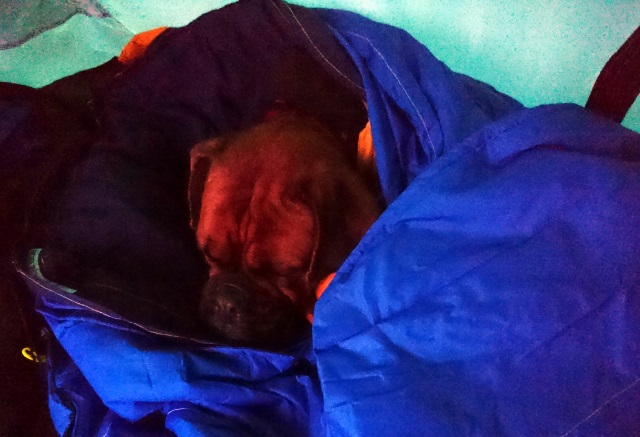 Mark is up and off much earlier than us in the morning. it’s been good to meet up, but he has a train to catch. It’s 10:30-ish again before we’re off.

The original plan is to plough straight across the plateau, visiting both Four Jacks’ Cabin and Kinder Gates, before dropping down to Hayfield. But it’s going to be hot and we’re still vying with each other over who has the heavier pack, and the edge path suddenly feels more attractive. 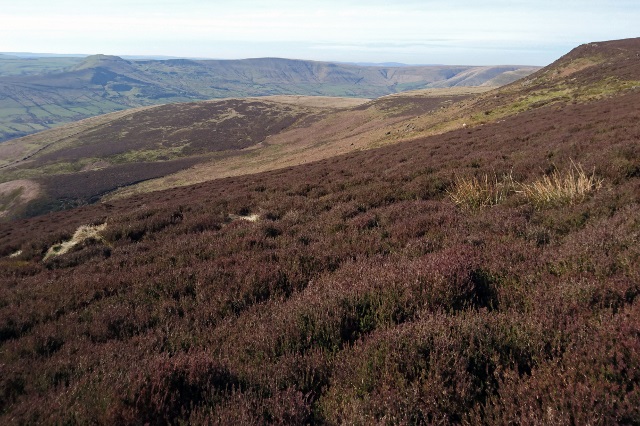 We skilfully manage to avoid around 300 runners on the Edale Skyline Fell Race, but it nevertheless gets busier and busier the nearer we get to the top of Grindsbrook. 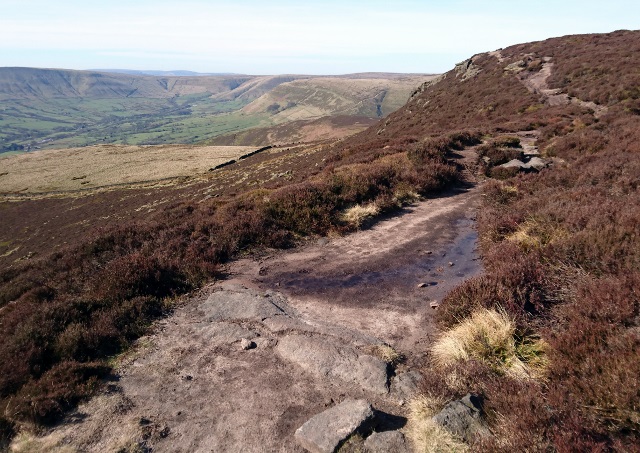 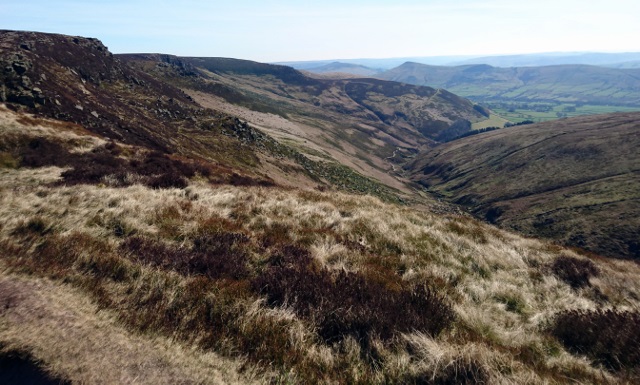 Today just happens to be Pebbles’ second birthday. Still a baby really, but I notice how brave and strong she’s starting to get – thoroughly enjoying herself learning to pick out routes up and around little rocky bits. Mountain Boxer in the making. 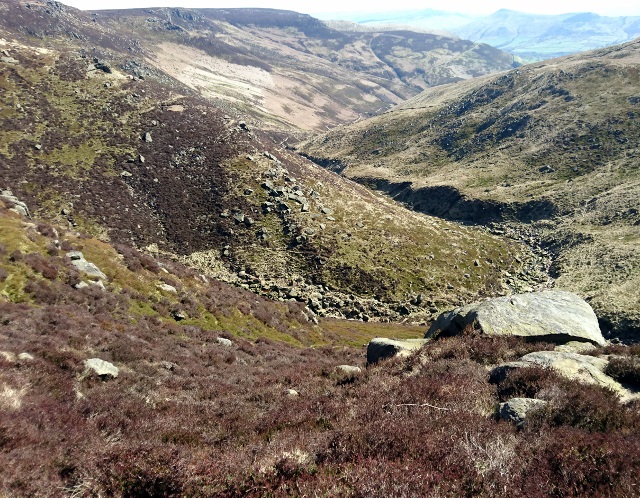 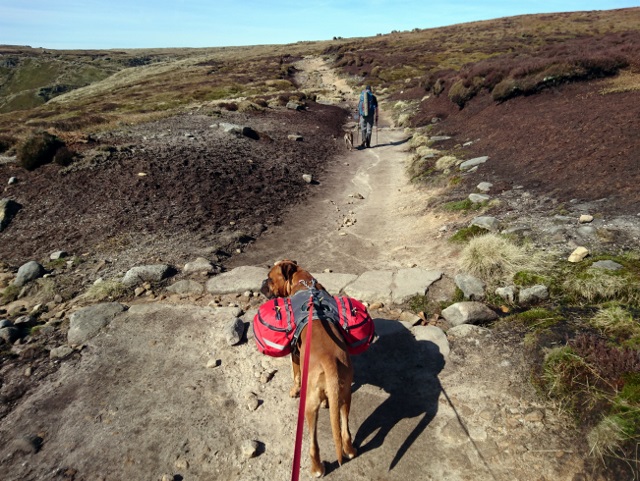 Nearly at Crowden Tower, we suddenly spy a familiar couple of figures. Geoff and Islay appear, on their way to meet up with us. Pebbles and Islay greet each other as though they’ve been apart for at least a month. 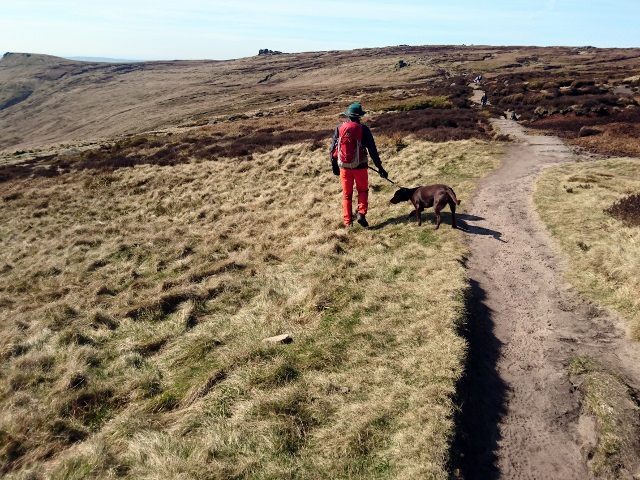 Proper lunch is had near the top of Crowden Brook, continuing on afterwards in the direction of the Woolpacks. Here, we’re not so lucky at avoiding the fell runners. The three of us go off in slightly different directions, trying to avoid runners, peat and rocks, before meeting up again out the other side. 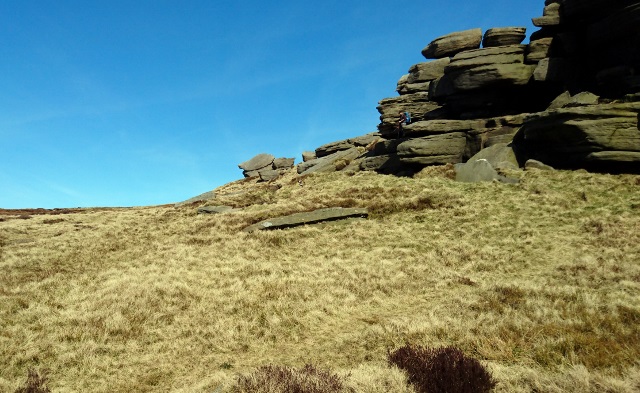 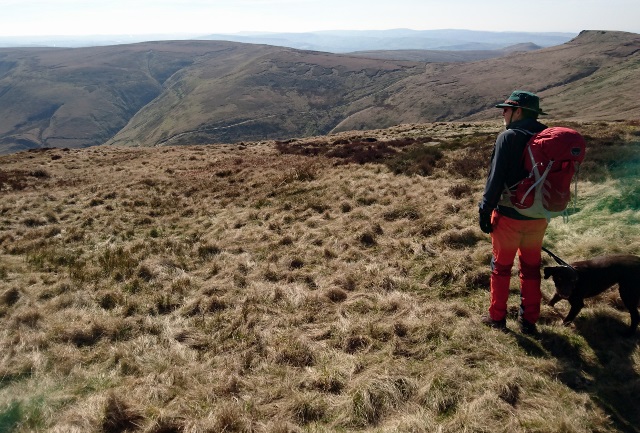 A clear view of Swines Back now shows what looks like hundreds more runners heading for us. Nightmare. Local knowledge kicks in. I suggest veering off towards Edale Rocks and around the far side of Swines Back. Almost instant peace, and another break is had looking down towards the Hayfield side of the massif. 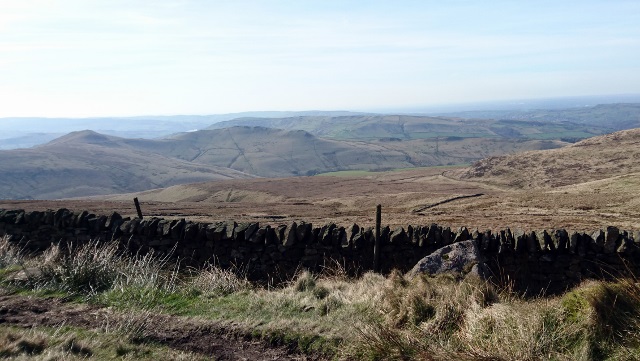 It’s been a fantastic weekend. Brilliant weather and company, and challenging enough to make you feel like you’ve accomplished something.

All that remains now, is the foot crippling slog down the Edale Cross track, and a short tarmac plod back into the village. 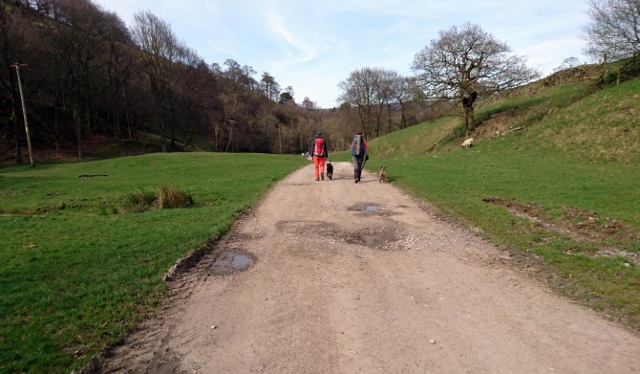