At 14,505ft, Mt Whitney is the highest peak in the contiguous United States. This makes it Very Popular. The normal way of tackling it is from the east side, over three days. On the first day you make your way from Whitney Portal (at 8,360ft) up to Trail Camp (12,000ft). The night is spent there, then the second day sees you summiting and then returning to Trail Camp for another night, before finally dropping back down to Whitney Portal on the third day.

In August of 1997, we managed to obtain a permit for this climb, which allowed us to summit on the 3rd of the month. In those days, permits were issued on a first come, first served basis. A few years after our trip, the system was changed to a lottery instead, making it almost impossible to get the necessary permit – the peak being so immensely popular.

Of course, there are some people who attempt to do it all in one day, but that’s certainly not for us!

We set off on our trip with high hopes, after spending a few days in Yosemite – supposedly acclimatising to the altitude. This was our first ever trip to anything this high and unfortunately we didn’t get it quite right. Since then, we have had many trips to the High Sierra without any problems, but have learnt to take the acclimatisation process much more slowly.

We did, however, have an amazing experience. We made it to Trail Camp in good time (in reality, climbing too quickly) and were treated to an almighty thunderstorm which rattled and circled around us all afternoon and most of the evening.

I did suffer, though. Up to press, this has still been the longest night of my life. I spent the whole time with a headache which felt like it was threatening to explode my head into little pieces, and a stomach which constantly threatened to throw its contents all over the floor.

I was no better the next morning. The weather had improved greatly – although there was forecast to be more thunderstorms that afternoon – but we made the decision to descend. And almost by magic, we only needed to descend around 1,000ft before I once again felt absolutely fine. 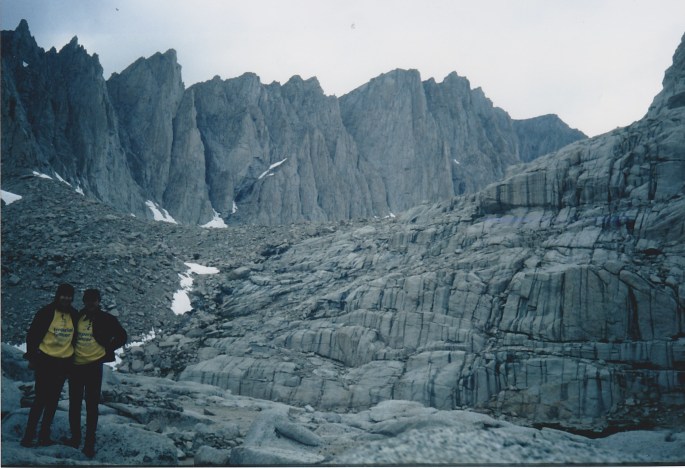 But we’d lost our permit slot. If it says 3rd August, then you can’t summit on the 2nd or the 4th – the 3rd it has to be. And they do have Rangers at random spots on the trail, checking up on you….

A lot was learnt, however, and this paved the way for many more wonderful trips to the High Sierra in California.

Apologies for the lack of photos. At that time we used to use slides and I’ve only ever had a handful converted to prints.