Mike and Lucky had had a scare – a spooky night up at Kirkcarrion. And being interested in these kind of things, I googled Kirkcarrion and found various bits of information:

‘…One of Durham’s most scenic Bronze Age sites, on the skyline of Lunedale and Tessdale. The barrow was excavated in 1804, and was found to hold a stone-lined grave with a cremation in a pot. The barrow was partially flattened in the process, but was then partially repaired, planted with pine trees and surrounded by a dry stone wall by the landowner. The tree-covered mound is visible from across Lunedale and Teesdale.
The name is said to derive from the burial, of a local chieftain called Caryn, with the original name of the site being Carreg Caryn…’

‘…Kirkcarrion was named after a Brigantean prince who was said to have been buried here in pre-Roman times, but it is thought much more likely that a Bronze-Age tribal chieftain was buried in the barrow. His or someone else’s ghost is still said to haunt the site on horseback….’

It all sounded good to me and before I knew it, Mike and I had concocted a plan to go back there for a ghost hunting wild camp. It was generally agreed that as many dogs as possible should also be there – for the purposes of guarding and protection from spooky stuff – so James and Reuben were also invited. Unfortunately, not being part of the retired community as yet, James was busy working that day and couldn’t make it. Mike and I weren’t totally convinced though, and decided that it was equally likely that James might well turn up in the middle of the night making spooky noises to try and scare us.

Rather cleverly, I thought, we managed to pick a couple of days for the vigil that had a decent weather forecast – grey, but totally dry………….

It was definitely dry when we met up at Bowlees and still dry when we set off. But it didn’t stay that way. 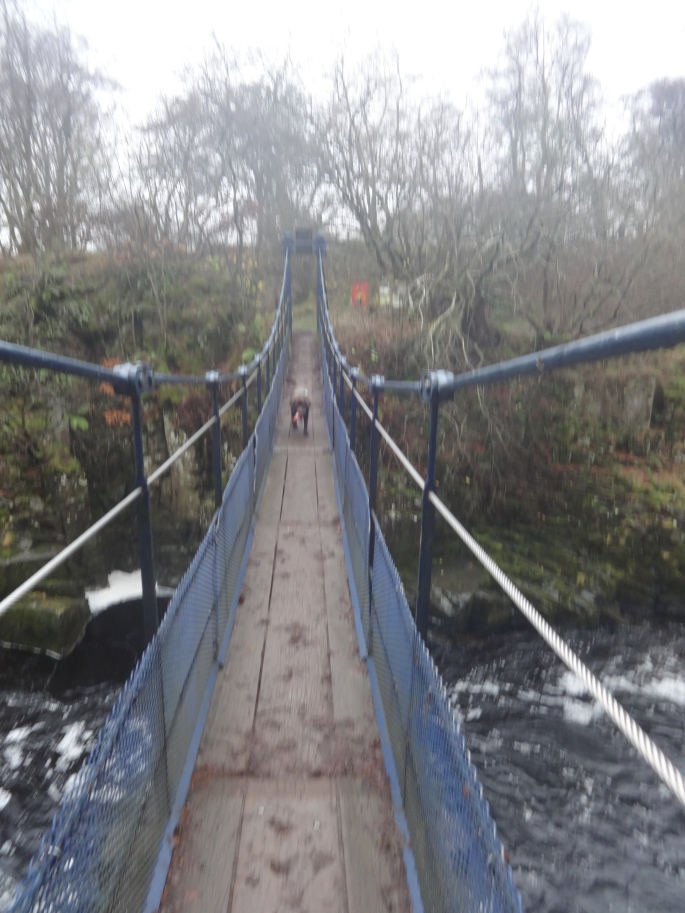 And as we climbed higher, the fog closed in.

The rain came next. Persistent. Wet stuff. It didn’t stop.

Not that Tilly minded. In fact she revelled in showing us the deepest ways across the raging streams we had to cross.

We did have the excitement of going past a flushing toilet in the middle of nowhere mind – one that had apparently been built specially for Prince Charles to use on a shoot at some point. 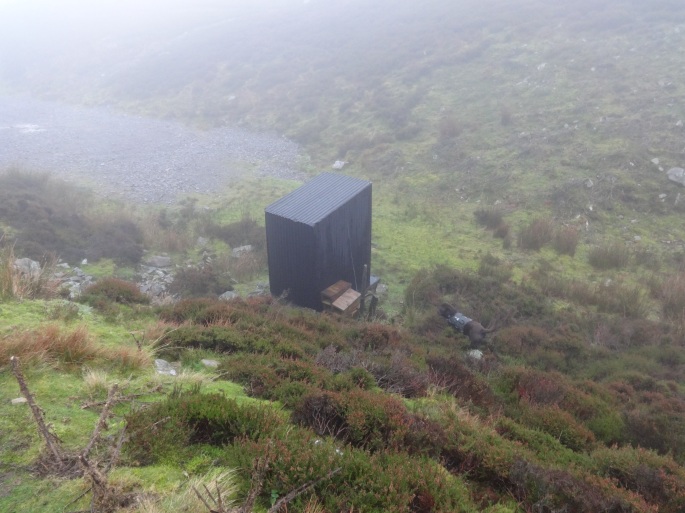 But the highlight of the afternoon, was when our destination spookily loomed out of the fog and rain.

The mound is surrounded by a stone wall – with no gate – and you have to know the secret way in. Luckily, Mike did. Also luckily, Mike had been up there earlier in the week (in the safety of daylight) and stashed 10 litres of water for us to use, as we didn’t know of a water source in the vicinity.

We carefully climbed in to the enclosure and found a level bit for the tents.

Of course at this time of year the nights are rather long and bring with them the challenge of trying not to eat and sleep too early. We got the dogs howling and swapped spooky experiences for a while, but by 6pm I’d given in and had my first course and by 8pm, Tilly had donned her pyjamas. 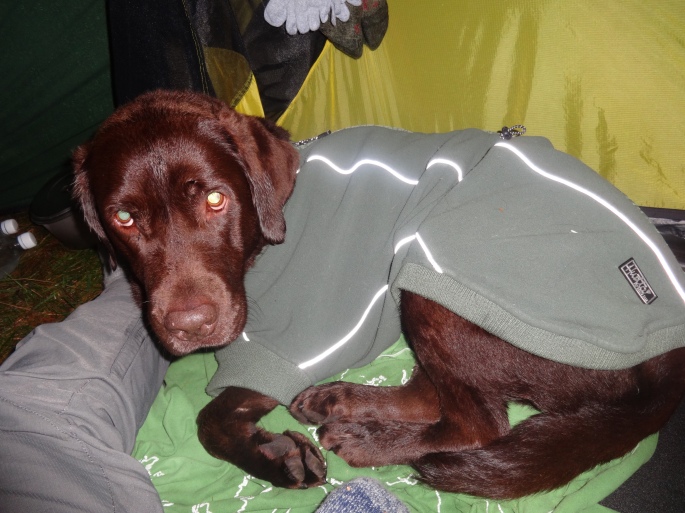 By 8:30pm, I’d shouted across to Mike that Tilly and I were now officially snuggled up and might well fall asleep. Which we did.

10:pm, and I was rudely awoken from a deep slumber, by an owl hooting rather loudly in the tree right over our tent. It went on for so long, sounding just like a recording, that I did begin to think it might well be James with his ‘spooky noises app’ on his mobile. After a while though, another owl joined in, and another, and then it took off from the tree showering us in water in the process. This made Tilly jump rather alarmingly and put her on High Alert for a while.

Mike and I start chatting spooky stuff again and did come to the conclusion that in this fog, no-one could possibly creep up on us without a torch. And they’d have to know the secret way into the enclosure.

By now, it was midnight. We ventured out for a little wander and discovered that the fog had actually lifted, leaving wonderful views of lights in the distance. 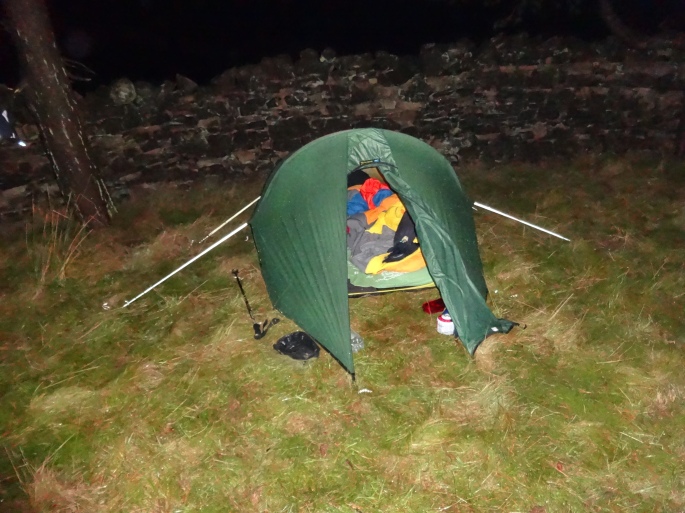 Mike then decided he was hungry, so had a midnight snack of coffee, cheese and oatcakes, but Tilly and I went back to sleep.

The rest of the night passed very peacefully, with nothing spooky happening. Tilly and I took a morning wander around the enclosure, noticing that the fog had once more returned. 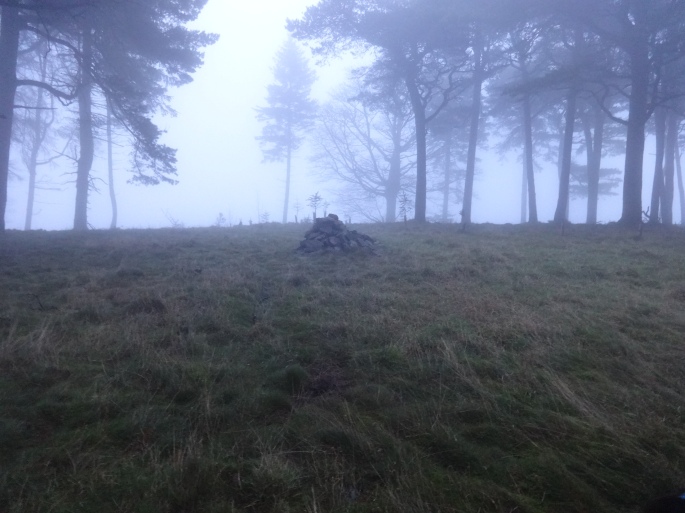 Well. A touch disappointing on the spooky front, but never mind. There was nothing for it now, but to amble back to Bowlees for lunch. We packed up and took the Pennine Way – along the edge of the River Tees – for the five mile return journey. At least it wasn’t raining today, but to say that the riverside path was wet, muddy and horrendously slippery, was a bit of an understatement. 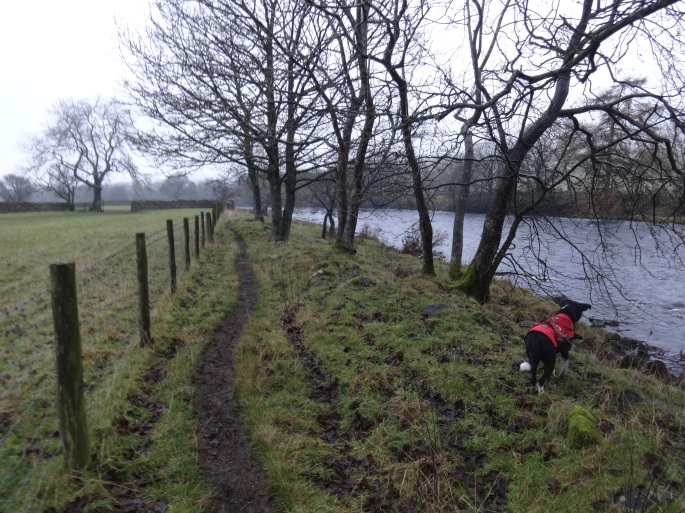 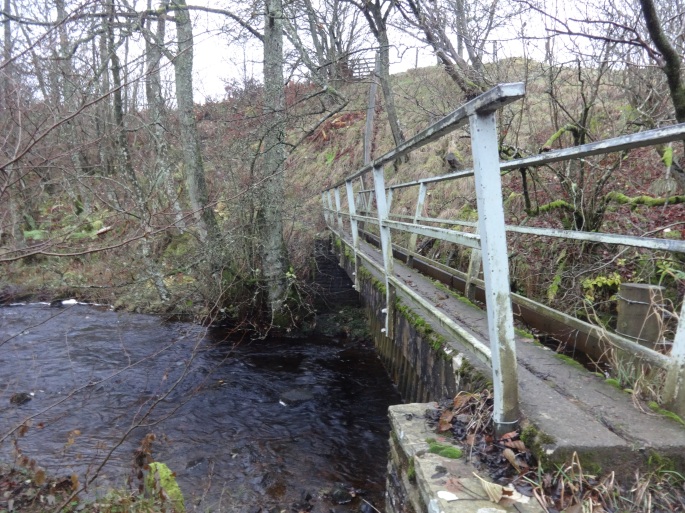 Anyway, despite the weather, we’d had fun and now that the Ghost Hunting Division of the Outdoor Bloggers has been formed, we’re looking for other spooky wild camps to investigate. Any suggestions?

If you want to read Mike’s version of events, you can click here.