It felt positively arctic in Sedbergh on Saturday morning. I was wandering around with Dixie, for about an hour and a half, waiting for Geoff to turn up with James and Reuben. James had parked his car up in Great Asby and Geoff had gone to pick the pair of them up and bring them back to Sedbergh, from where we were setting off on a two day linear backpack. It was another section of the Dales High Way that I’d decided to do. I’m not really taking the route seriously though. I’ve missed out about 3 days worth of walking that goes from Settle to Sedbergh, on the basis that the Three Peaks area is just too busy for any sane person to go walking in on an average weekend. The Howgill section promised to be quieter though.

After the second wander up and down Sedbergh High Street, I noticed a nice looking café which boasted, ‘we are very dog friendly’. I looked at Dixie and she looked at me beseechingly, and we went in. True to their word, they welcomed us both with open arms and we parked ourselves next to the stove and munched on toast and tea. This was definitely the place to wait for Geoff and James! And anyone passing through Sedbergh, I can thoroughly recommend the place – with or without a dog:

We timed it well and as we walked back down the road after exiting the café, the van parked up in front of us. It was now nearly lunchtime, so it seemed reasonable to have a sandwich and a coffee before hitting the trail, but we couldn’t stay in the warm forever and were soon toiling up a steep hillside out of Sedbergh. 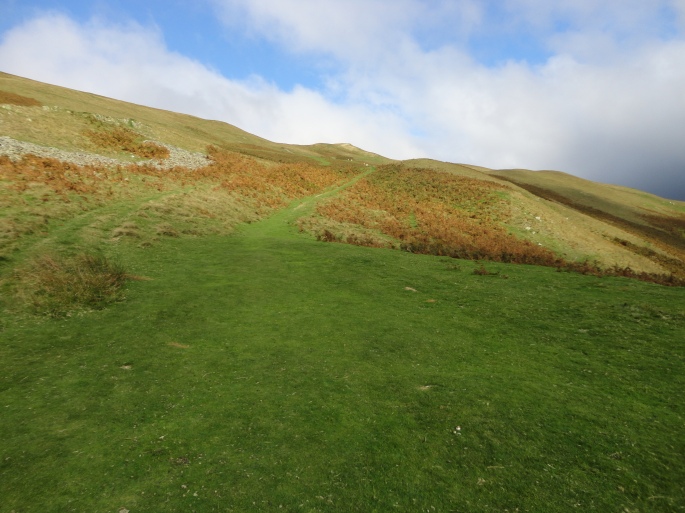 The weather was decidedly fresh. The clouds were scudding across the sky at a rate of knots and the wind was making it difficult for me to hold my camera still. I just kept pointing it, pressing the button and hoping for the best.

One moment it would be sunny, the next grey. The skyscape didn’t stay the same for long. 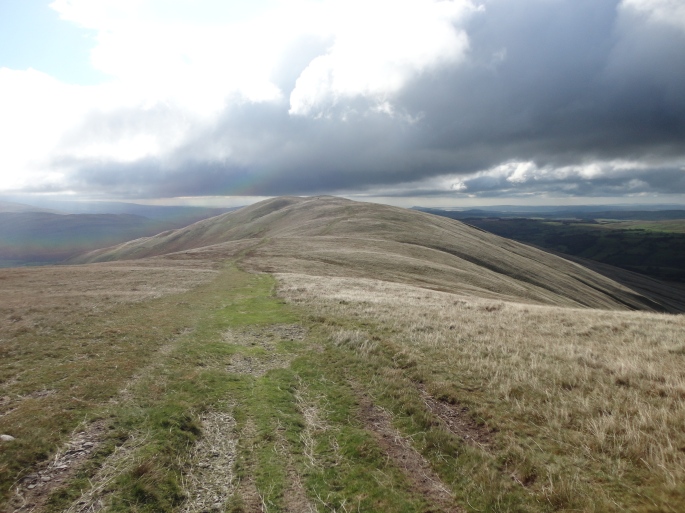 We contoured around the side of Winder and on up the wide ridge.

A slight detour had to be made to take in the top of Arant Haw, for some list or other that James was ticking everything off on. He obviously had to take a picture of the summit cairn as well…..wouldn’t be surprised if he’s got all his tops catalogued with a photo……

It certainly wasn’t busy up on these hills, but we did pass a handful of people – all descending by this time of the day. One guy felt compelled to warn us how windy it was up top so we’d better hang on to the dogs!

And as we approached the col of Rowantree Grains and the wind was funnelled through in between the peaks, it suddenly became really hard work to stay upright

James got his wind measuring equipment out and clocked an average windspeed of about 44mph, with gusts up to 49mph. Windy!

The views down towards Swarth Greaves Beck were well worth the climb though. 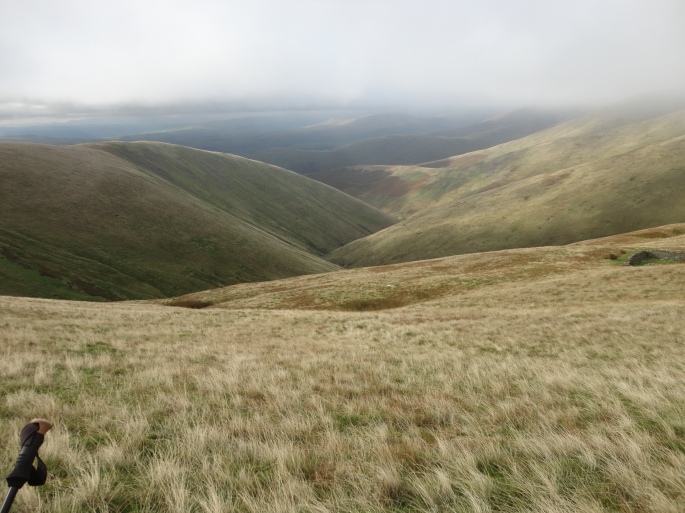 It was around this point that James said he needed to stop and put his overtrousers on. I suddenly realised that it was in fact raining and that I was also getting a bit wet. With focusing so much on trying to walk upright, I just hadn’t noticed! It wasn’t actually raining particularly hard – just drizzling really – but drizzle that was hitting you at around 40mph was bound to have an effect.

On the final pull up to The Calf we met a rather large group of walkers. I realised I’d seen them earlier in the day when I’d been wandering around Sedbergh. The first guy we passed, saw Reuben and ran off to the side to keep well away from the Staffy Devil Dog, and then when he thought it safe to take to the path again, noticed Dixie the Boxer Devil Dog and had to run off again!

Anyway, we soon reached the summit of The Calf and another obligatory photo. Not much of a view mind, and not quite as windy as the col had been either. 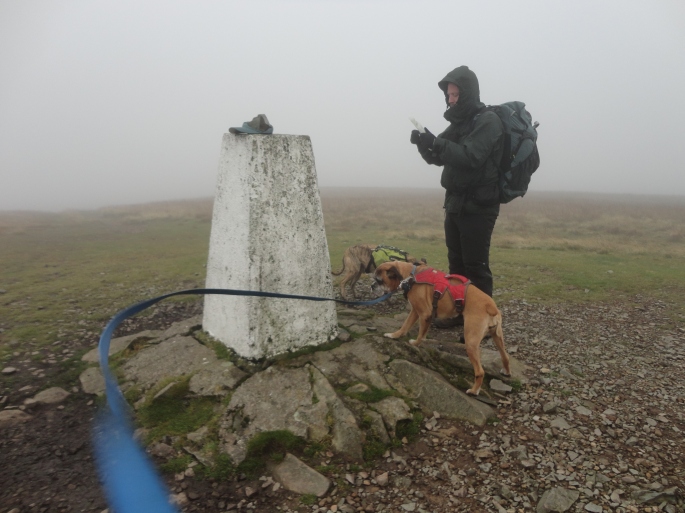 We took the path off the top in the direction of Bowderdale and headed down the valley, the wind easing the lower we got.

It was turning into a decidedly murky evening.

About a third of the way down the valley we found a nice spot for the night, right next to the stream. (I think I must have had some rain on the lens for this photo.)

Tents were soon up, a brew was made and it was time for Dixie’s dinner. 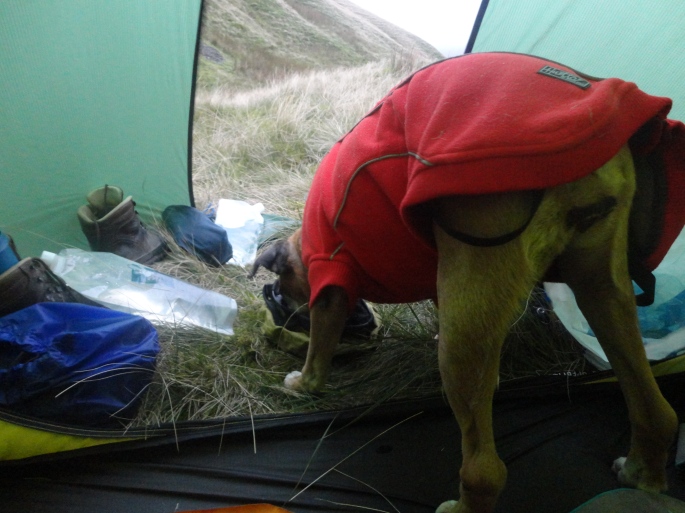 I’d brought a previously untried meal for my tea. It was quite tasty to start with, but by the time I’d eaten half of it I’d had enough. It seemed to lose it’s appeal somewhat, the more I ate. Left me extremely thirsty for the rest of the night too. 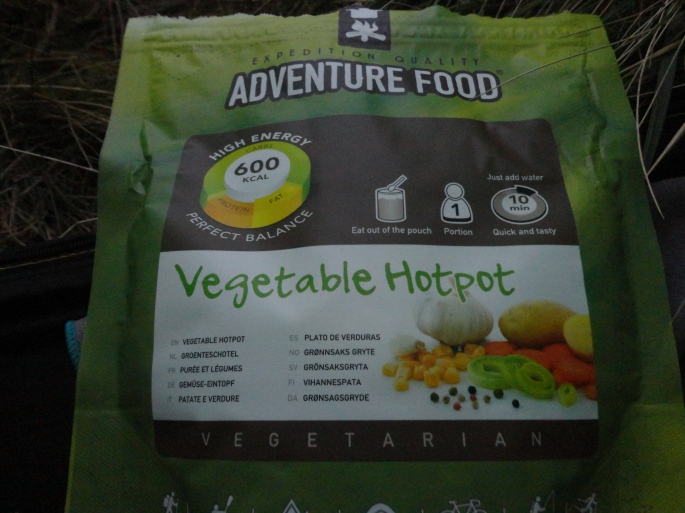 I didn’t sleep too badly, but was aware of the wind getting stronger towards morning. Luckily the rain had stopped though. Breakfast was cooked in the shelter of the porch

while Dixie decided she was having a bit of a lie in. Spot the Boxer ears…..

After a bit of a lazy start then, we decided to pack up and be ready to set off around 10am. Dixie and Reuben both supervised the proceedings. Dixie also decided that it was cold enough to set off walking with her fleece jacket on. 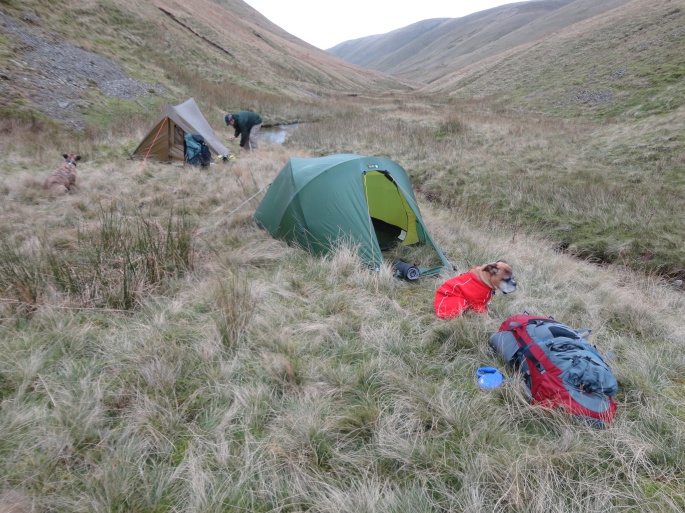 Looking back to our pitch by the river.

It was quite a long walk down Bowderdale to the village of the same name. Very scenic though. 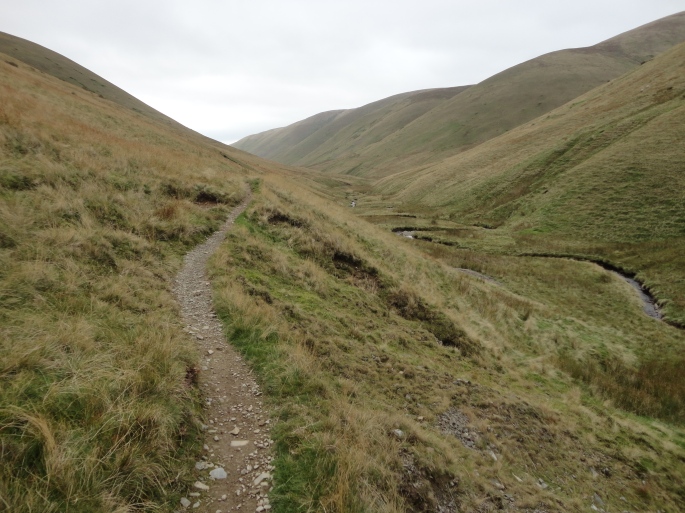 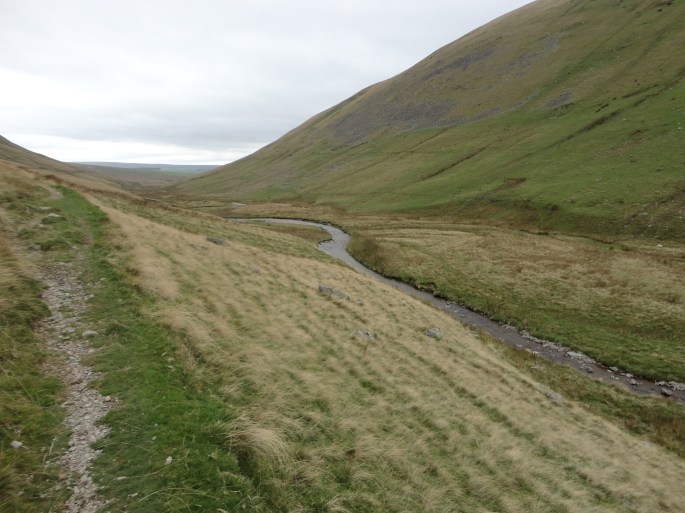 On leaving the valley, we moved out of the Howgill range and onto Ravenstonedale Moor. We had a moment where we both double checked our position, when we came across a gate which had clearly been designed to deter any walkers from ever going through it. We were where we thought we were though, so James persevered with the yards of string that had been used round the ‘gate’ and we continued on.

Half a mile later, and I did a double-take at a walker and a dog coming towards us. Tilly and Geoff had walked in from the other end of the linear route to meet up with us. There then followed a minor domestic while Geoff tried to tell me we were on the wrong path….he was wrong of course…..although in his defence, how many of us can honestly say that we’ve never made any navigational errors, especially in the lower areas like the White Peak where walls and paths criss-cross each other all over the place?

It was now about 2pm and we were long overdue a proper lunch stop.

The last few miles of the day went through some lovely limestone pavement scenery. All the nicer for not being teeming with people like the more famous areas are around Malham. 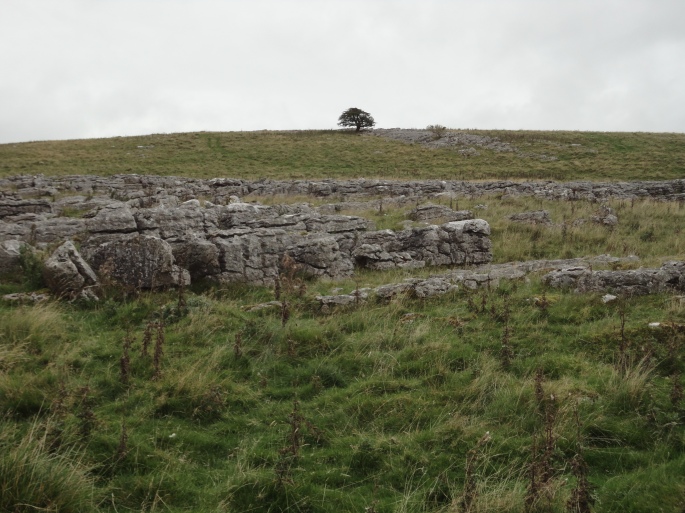 And I even managed to capture on film the moment that Reuben stole Tilly’s ball.

Thankfully, James’ car was still safe in Great Asby when we finally arrived there. Probably the Three Billy Goats Gruff that were guarding the bridge there, had been keeping an eye on it.

And once in the village, there was nothing for it but to have tea, coffee and some of Geoff’s fantastic apple puddingy thing. A great weekend.

Of course James has also done a wonderful write up of the weekend – spell checked and proof read by Reuben –  and this can be found here.

28 thoughts on “Dixie And Reuben Blown About In The Howgills”