We were due to meet James in Horton in Ribblesdale at 3:30pm on the Friday, but not long after we’d left home a text hinted that he could possibly be quite late; he was stuck in a serious traffic jam on the M1 in Yorkshire. I checked the traffic reports as Geoff drove us north and discovered there’d been a nasty accident with a lorry on the motorway, resulting in standing traffic in both directions. As it happened though, he was only an hour late in the end and he joined us in the van for coffee and Geoff’s home made chocolate chip cookies before we finally set off towards our camping spot for the night.

James had sorted a 3 day route for us and this evening’s section took us out of Horton on the Pennine Way, towards Pen-y-Ghent.

Where the PW turned right towards Pen-y-Ghent, we carried straight on and headed off in the direction of Hull Pot.

Geoff used to do a lot of caving in years gone by, but he says he has no recollection of whether he ever did Hull Pot or not. Can’t understand that, I’d certainly remember……….

Hull Pot Beck is a decent sized beck which makes its way down off the moors before emptying into this cave system and it was here that we started following it upstream to our pitch for the night. 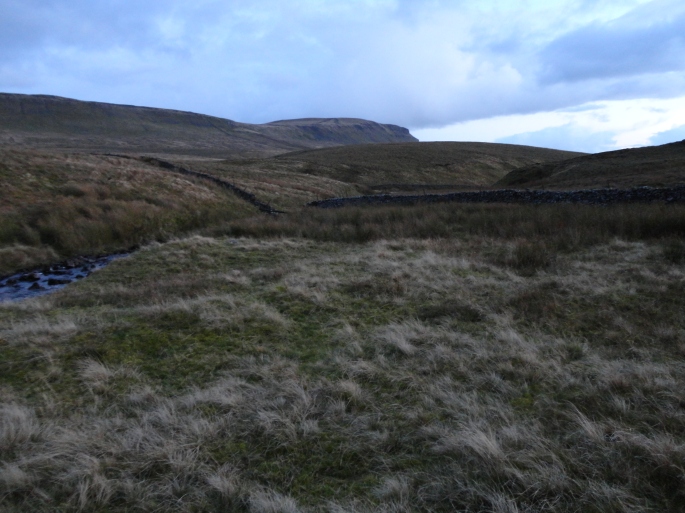 Dusk was approaching and the temperature starting to drop as we chose our respective tent spots. 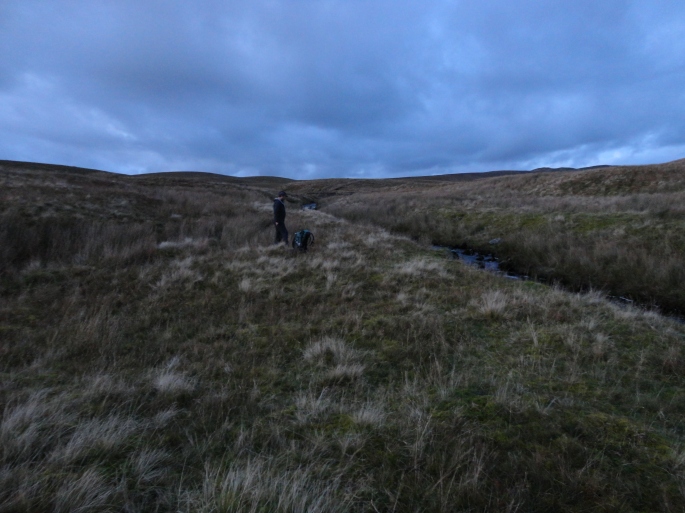 It was dark by the time we were cooking and eating, and quite chilled too by the time we’d chatted for a while. I decided to go and get in my sleeping bag at around 9:00pm and was asleep within about half an hour, but awake again a couple of hours later, feeling really cold. I put my duvet on, fell asleep again, but woke another couple of hours later, absolutely boiling! My current camping mattress is a Neoair All Seasons; I haven’t had it long and have only used it a few times, but already have a theory about it. It’s very comfortable and very warm once you’ve been in bed for a while, but it seems like for the first hour or so it takes all the heat out of you before all the baffley, reflectively things inside can get to work and start reflecting the heat back.

I also seriously fell out with my Exped Air Pillow; nearly every time I put my head on it, it shot off in some unexpected direction. Seemed to spend half the night chasing it round the tent……

I woke properly around 7:00 and had to go out to answer the call of nature. I unzipped the inner, then struggled with the outer zips. They seemed to be stuck, but I couldn’t work out what it was they were caught on. Then I realised – they were frozen.

There was no frost on the ground, but we’d had a couple of rain showers overnight and there was now a pattern of frozen ice droplets all over the flysheet.

James had some ice in the water he’d left outside and both our tents were somewhat drippy with condensation inside. I was using two summer sleeping bags put together as I need a new winter one, so it was just the top one of mine that had got a bit damp. By the time we’d sorted breakfast though, the sun had come up and had nicely warmed the inside of my tent and dried off the bag.

By 10:30, we were ready for off. The plan for today was an 11.5 mile route, hopefully ending up at Jeffrey Pot Scar for the evening’s camp.

So, James continued to lead us northwards, through the tussocks and the bogs, until we picked up the western edge of a sweeping ridge, high above the valley of Langstrothdale.

I’m sure my photos don’t do it justice, but there did seem to be a special clarity to the light this weekend. You could see for miles.

The ridge went on for several miles, taking in High Green Field Knott and Horse Head, before we left it to wander downwards towards Yockenthwaite. Excellent views down into Langstrothdale and Littondale made for a very pleasant few hours. 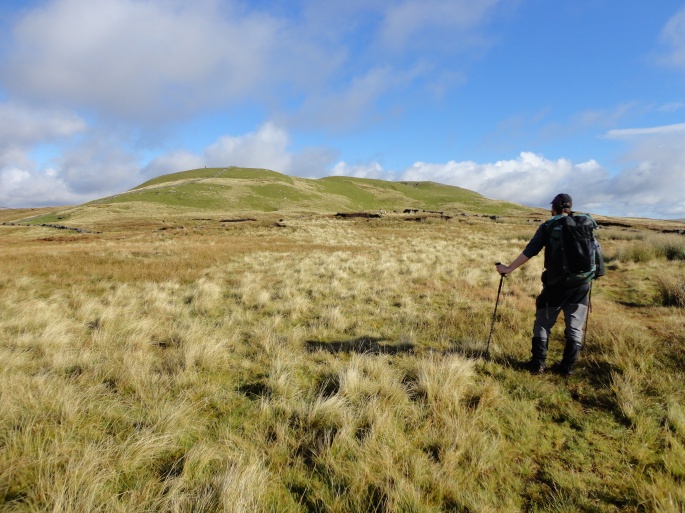 It was not particularly quick going however. It was tussocky, we had several barbed-wired walls to cross, lots of sharp up and down bits, and a few boggy bits thrown in for good measure. 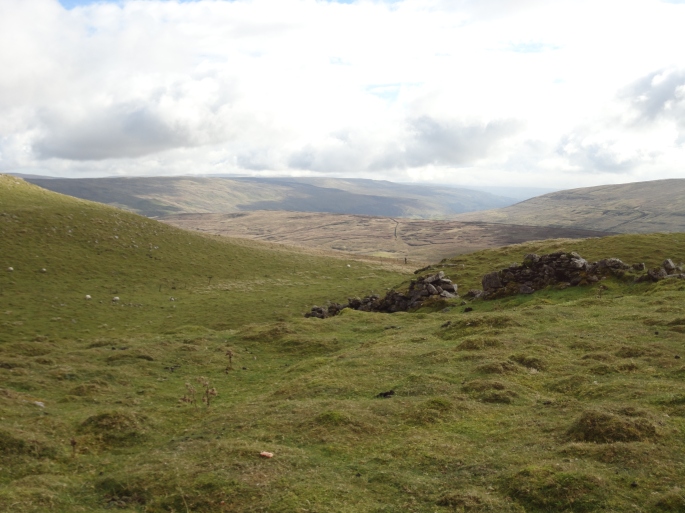 By the time we’d started to drop down into Lothersdale and had reached the spot James had earmarked for lunch, it was 3:30. We discussed a plan B. If we continued on to Jeffrey Pot it would have certainly been dark before we’d got there, so we scoured the other side of the valley and spotted what looked like a possible camping spot on a grassy ledge high above Yockenthwaite. Definitely worth investigating.

The grassy ledge was perfect, with a stream for water only 5 minutes walk away. We soon had our tents pitched, and this time I positioned mine so that I could chat with James without leaving the warm comfort of my tent and sleeping bag. In this way, I figured that not only would I be warm and cosy all evening, I would get the better of my Neoair and have it well warmed up before I fell asleep. 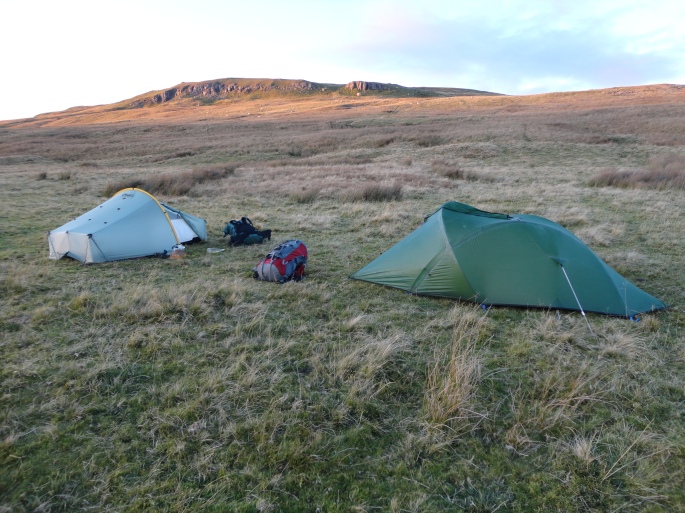 There was some muttering from James about how he hoped I didn’t snore; I just ignored him.

It was now about 7:00pm and we were both ready for food and a hot drink. We chatted from our tents, cooking in our respective porches and sheltering from the cold breeze which was now blowing.

Suddenly, at around 8:30, I couldn’t keep my eyes open any more. I said good-night to James, zipped myself in and was asleep in seconds.

I woke, needing a toilet excursion, at about midnight. Unlike the previous night, I was still warm and cosy. My plan to warm the Neoair up before bedtime seemed to have worked. As I unzipped the tent door to exit my little cocoon, I was hit by the fantastic view of a black, black sky, absolutely filled with millions of bright stars. It was actually worth getting up for. Cold, but not frosty, I spent a few minutes finding the few constellations that I know – the Plough, Orion, the North Star. The air smelt pure and clear.

As I got back into my still warm sleeping bag, my eyes closed and I started to doze off. Suddenly, I was roused by a strange sort of growling, whistley kind of noise. Years of backpacking in the States have sharpened my senses at night – there are times when you seem to be constantly listening out for sounds of bear or mountain lion, even in your sleep. But this was Yorkshire; what on earth could it be? I listened again. Could it be…? No, surely not… surely it couldn’t be James snoring……

As we hadn’t made the intended mileage yesterday, James had decided we needed to get up early this morning, so he set his alarm for 7:30. I was already awake anyway, having had a pretty good sleep. It was another cold morning, with frozen zips, frost covered grass and drippy tent interiors.

We decided to alter the route for the day slightly as there was no way we were going to make up all the miles originally planned, and end the trip at Newby Head instead of Ribblehead. A few hit and miss texts the previous evening had managed to convey our plans to Geoff – who was meeting us at the end of the trip – and we’d also suggested that we might see Geoff at around lunch time too, as he’d been wild camping in the van on the Yockenthwaite to Hawes road.

We set off then at about 9:30 and started contouring around the northern side of Langstrothdale.

We dropped into Deepdale Gill and climbed up out of the other side, onto the moors near Oughtershaw Tarn.

Once out on the top, the miles quickly turned into ‘bog miles’. The going was once again wet, boggy, gloopy and slow.

Various walls and fences needed to be scaled too, and we realised fairly quickly that we weren’t going to manage to meet up with Geoff for a tea and cookie break by lunchtime.

Knowing Geoff, I was convinced that he wouldn’t have waited but would have gone off and done something else, but James was certain he’d still be there, ready to dole out home made cakes and hot drinks to the walkers.

We must have been about an hour and a half behind schedule as we started nearing the road crossing, when James suddenly waved and shouted that he could see Geoff. I didn’t believe him and said he was having me on, but had to eat my words when I noticed Tilly bounding across the moors, closely followed by Geoff and Dixie. (Geoff wasn’t bounding, he’d managed to lose his glasses in a bog on the way over and so wasn’t the happiest of bunnies.) 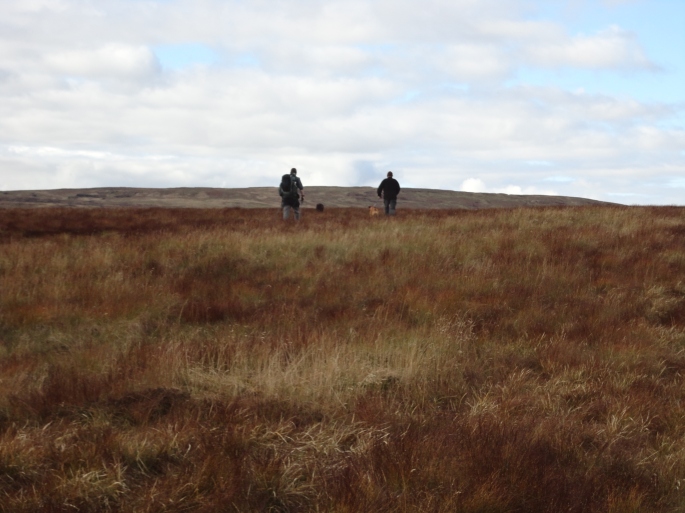 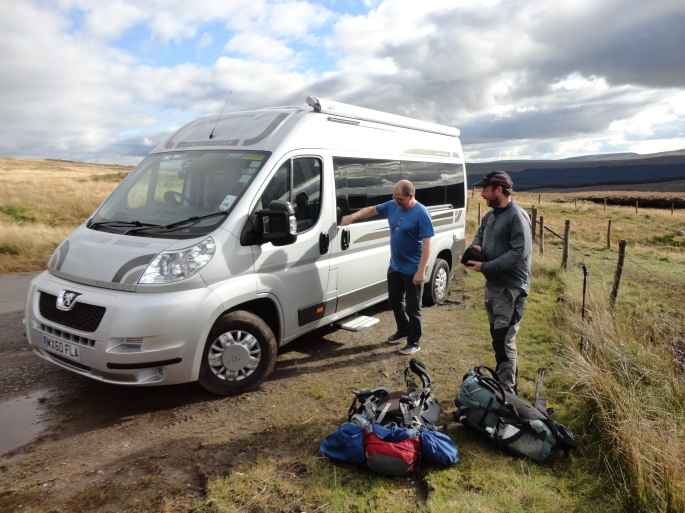 We couldn’t stay munching and relaxing in the van for ever mind, it was only a quick pit stop; we still had another 4.5 miles to go before journey’s end. These were easy miles though. We picked up a grassy track which took us on to Cam High Road and another section of the Pennine Way. The clarity of the light was still unbelievable and although it doesn’t show up in my photos, we could actually see the Irish Sea in the far distance.

Cam High Road was left after a couple of miles and we finished the trip by dropping down to Newby Head on the Ribble Way – passing (we presumed), the source of the River Ribble somewhere en route. 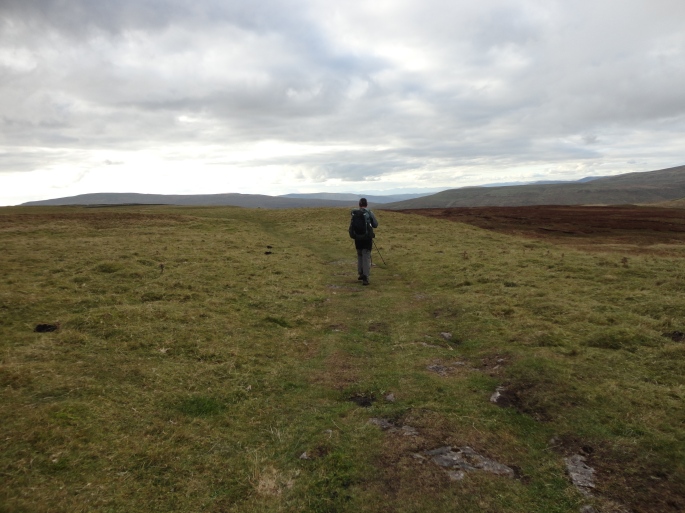 Once again, long-suffering Geoff was there to meet us at the road, and he transported us all back to Horton so that James could pick up his car.

It was a great weekend and thanks to James for not only organising a smashing route, but also wonderful weather! Don’t know how he managed that…

And extra thanks to Geoff for all the running around, hot drinks and home-made cakes 🙂

You can read James’ version of who was snoring here…

29 thoughts on “Frost And Frozen Zips In The Dales”